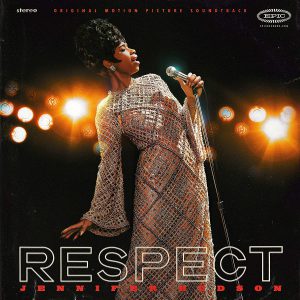 Paving the way for Hudson’s blockbuster big-screen turn as Aretha Franklin, it will appear on the Original Motion Picture Soundtrack to RESPECT and serve as the film’s only original song. Hudson was handpicked by Franklin to portray her in the film from MGM, which opens in theatres nationwide on August 13th. The soundtrack will be available on the same day.

Get “Here I Am (Singing My Way Home)” HERE Friday via Epic Records.

Hudson added, “Music is such a living and breathing character in this film, as it was in Ms. Franklin’s life. The process of creating this song was like constructing the greatest tribute I could possibly offer to her spirit. It was the final exhale of this extraordinary project and one that I let out with complete fulfillment. Being able to do so with Carole and Jamie was an incredible privilege. Carole is one of the greatest songwriters of all time and, whether we were trading stories, playing piano together over video conference, or working through lyrics, it was always a masterclass – both in life and music. Jamie and I have collaborated together in the past and it’s always so wonderful to create with him – he is continuously thinking outside of the box in a way that deepens the musical experience in indescribable ways. Our goal was to show that music was always the anchor for Ms. Franklin, in all that she did, and I hope this song illustrates the strength of her voice – both literally and figuratively – which always brought her home.”

About the collaboration, King commented, “Writing a song with Jamie Hartman and Jennifer Hudson felt both familiar and fresh at the same time. The process of songwriting continues to amaze me.  One minute there’s nothing, and then a song grows out of the seed of an idea.  The seed was dormant when Jennifer, Jamie, and I first met virtually. Jennifer and I had previously performed together, and I was excited about writing with her for no less than a film called Respect in which Jennifer plays Aretha Franklin! I’m so pleased to have not just one but two songs as part of the soundtrack of Respect—the 21st century song “Here I Am (Singing My Way Home)” and my 20th century co-write with Gerry Goffin, “(You Make Me Feel Like a) Natural Woman.”

Epic Records Chairwoman and CEO Sylvia Rhone said, “What Jennifer, Carole, and Jamie have created together is nothing short of historic. It celebrates the legacy of Aretha Franklin by channeling her spirit and style in an original, no less. As soon as I heard it, I was speechless. It has all the elements of a future American songbook staple.”

“Here I Am (Singing My Way Home)” highlights Hudson’s earthquaking range with a seismic crescendo. Right out of the gate, she proclaims, “It’s time for me to sing” over glorious church organ before twinkling piano wraps around her vocals. It officially impacts Hot AC and Urban AC on Monday June 21.

One of the biggest, boldest, and brightest voices in contemporary music, Jennifer Hudson stands alone. Not only is she a two-time GRAMMY® Award winner and best-selling author, but she has received an Academy® Award, a Golden Globe®, and countless other honors as an actress. Her self-titled 2008 debut Jennifer Hudson earned a platinum certification, the 2011 follow-up I Remember Me went gold, and 2014’s JHUD drew a GRAMMY® nod. She has starred in films ranging from Dreamgirls and Sex and the City to Chi-Raq and Sing, in addition to taking over Broadway in The Color Purple, for which the soundtrack garnered Hudson another Grammy win. Along the way, she became a best-selling author and served as a coach on The Voice UK and U.S.  In 2019, she appeared as Grizabella in the big-screen adaptation of Cats, and she also contributed “I’ll Fight” to the critically acclaimed documentary RBG, garnering an Academy® Award nomination. In 2021, she stars as Aretha Franklin in director Liesl Tommy’s highly anticipated biopic Respect, of which she is also an executive producer. Franklin personally chose Hudson to star. She will be releasing new music soon.

From MGM, Respect follows the rise of Aretha Franklin’s career from a child singing in her father’s church’s choir to her international superstardom, Respect is the remarkable true story of Franklin’s journey to find her voice.