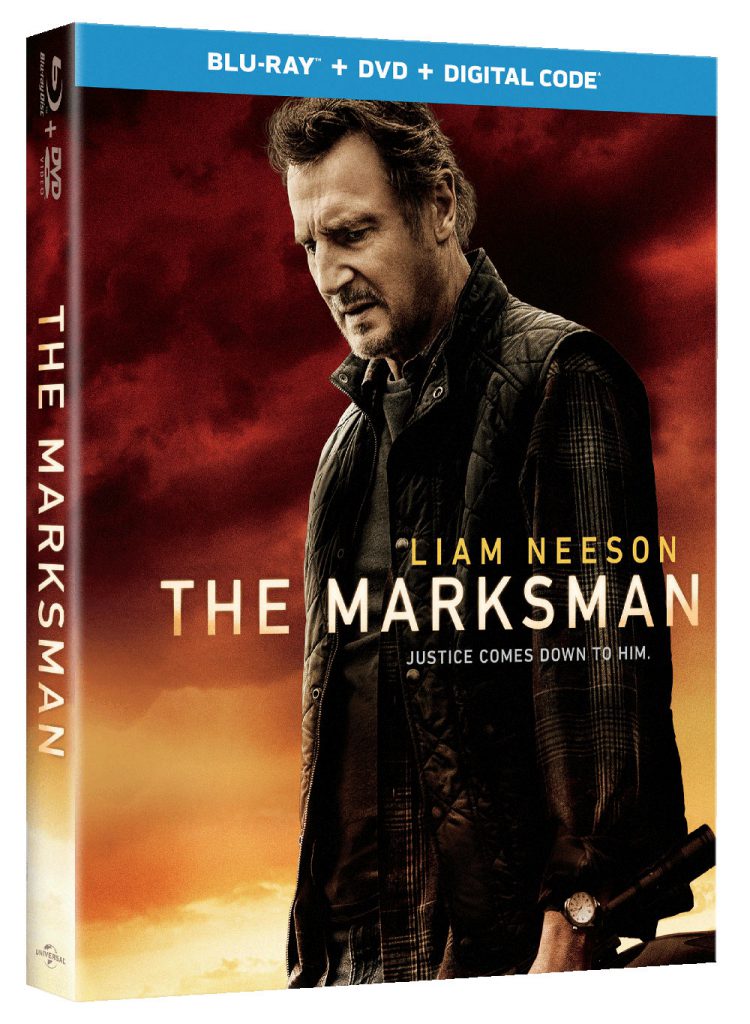 Universal City, California, March 18, 2021 – Oscar® nominee Liam Neeson is Jim Hanson, a former Marine turned rancher who defies the law to save a young boy’s life from a group of merciless cartel assassins in the suspenseful and powerful action-packed film, THE MARKSMAN, available to own for the first time on Digital April 27, 2021 and Blu-ray™, DVD and On Demand on May 11, 2021 from Universal Pictures Home Entertainment.

From Open Road Films and Briarcliff Entertainment, THE MARKSMAN is a tense thriller that follows one man and the boy he promised to protect on a dangerous cat-and-mouse race across America that leaves audiences on the edge of their seat from start to finish. The film is directed by Academy Award® nominee Robert Lorenz (American Sniper, Mystic River) and showcases remarkable performances by Neeson (Taken franchise, The Grey) and the film’s supporting cast including Katheryn Winnick (The Dark Tower, “Big Sky”), Juan Pablo Raba (Peppermint, “Narcos”), Teresa Ruiz (“Narcos: Mexico,” “Here on Earth”) and Jacob Perez (Papa Bear, Willy Goes Way Back). Featuring never-before-seen bonus content with cast and crew, THE MARKSMAN on digital, Blu-ray™ and DVD includes an exclusive behind-the-scenes piece that dives deeper into the deadly cross-country road trip of the captivating story.

Ex-Marine and hardened Arizona rancher Jim Hanson (Neeson) simply wants to be left alone as he tries to make a living on an isolated stretch of borderland. But everything changes when he witnesses 11-year-old migrant Miguel (Perez) and his mother (Ruiz) fleeing from a band of assassins sent by a ruthless drug cartel. After being caught in a shoot-out, Miguel’s mother begs Jim to take her son to the safety of their family in Chicago. Defying law-enforcement, Jim and Miguel hit the road and slowly begin to forge an unlikely friendship, while the cartel’s relentless assassins blaze a bloody trail, hot on their heels.

With the purchase of THE MARKSMAN on disc or digital, fans are eligible to earn points towards special rewards via the Universal All-Access Rewards program. Members can redeem their points for digital movies, signed collectables, box sets, win exclusive prizes and more! For FREE registration and details please visit www.MyUniversalRewards.com.

THE MARKSMAN will be available on Blu-rayTM, DVD and Digital.

ABOUT BRIARCLIFF ENTERTAINMENT & OPEN ROAD FILMS:
Briarcliff Entertainment is a new, forward-thinking entertainment company, formed in 2018 by industry veteran Tom Ortenberg. In a partnership with Raven Capital Management, Briarcliff recently announced the relaunch of Open Road Films, of which Ortenberg was the Founding CEO. Key past Open Road titles include the Academy Award winner for Best Picture Spotlight, The Grey, Chef, The Nut Job, End of Watch and Nightcrawler. Previous Briarcliff theatrical releases include Michael Moore’s Fahrenheit 11/9, the trailblazing Latinx superhero film El Chicano, and the supernatural thriller Don’t Let Go, released in conjunction with Blumhouse and Universal Pictures, and the documentary The Dissident.