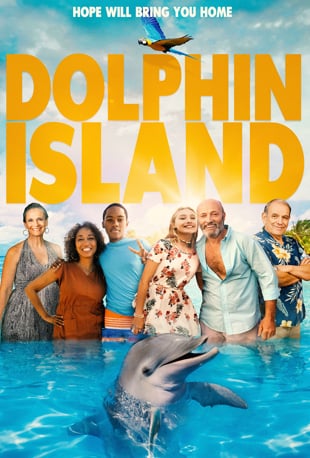 [Los Angeles, CA]  Just in time for Spring Break, the heartfelt new family-film DOLPHIN ISLAND is out today on all major VOD and streaming platforms across the US. Created by Mr. Puppy Productions and Entertainment Squad, DOLPHIN ISLAND was filmed in The Bahamas and shares the story of a girl, her dolphin, and the power of family.

Links to screen the film on all major screening platforms can be found here:

Producer/Writer Shaked Berenson explains, “We wanted to make a film for all ages that would inspire the viewers to consider the power of family-in whatever form we may find it.”

Early reviews of the film have been glowing, including:

Crosswalk – “A family-friendly film about love, with plenty of laughs and even a few surprises.”

Movieguide – “Families and children of all ages will enjoy DOLPHIN ISLAND’s positive messages and fun storyline.”

Film Threat – “The beautiful vistas could be a balm to anyone who’s thinking about the islands but can’t get there.”

dove.org – “A heartwarming tale of love and accountability, will be entertaining for the whole family.”

DOLPHIN ISLAND invites us to experience an island paradise, where fourteen-year-old Annabel  lives with her fisherman grandfather. She is surrounded by an extended family of loving but quirky neighbors and her best friend – a dolphin named Mitzy.  Everything changes when her maternal grandparents arrive with a shifty lawyer to bring her back to New York. It’s up to Annabel and her friends to figure out how to save the day and prove that love conquers all!

DOLPHIN ISLAND was directed by Mike Disa (SPACE DOGS, HOODWINKED TOO!), Produced by Shaked Berenson (SPACE DOGS, A TIGER’ S TALE), and written by Disa, Berenson, and Rolfe Kanefsky (PUPPY SWAP: LOVE UNLEASHED). The filmmakers felt compelled to create a project that could help The Bahamas rebuild after Hurricane Dorian.  The film brought jobs and resources to the island nation as planned, but no one could have expected that a pandemic would close travel shortly after the filming was complete.

Berenson adds, “We hope DOLPHIN ISLAND helps families escape to a beautiful island paradise, and possibly choose to travel there as restrictions are being lifted. We also hope that the film will help girls be inspired to seek out careers in science.”

The film was created by Mr. Puppy Productions, the family and animation label of Shaked Berenson’s film finance and distribution company, Entertainment Squad.