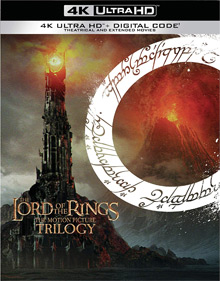 The Lord of the Rings: The Motion Picture Trilogy 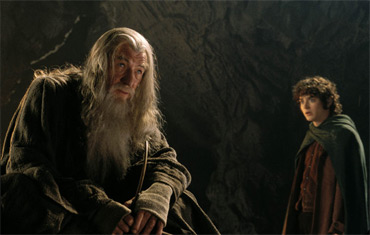 An ancient ring thought lost for centuries has been found, and through a strange twist in fate has been given to a small Hobbit named Frodo. When a wizard named Gandalf discovers the ring is in fact the One Ring of the Dark Lord Sauron, Frodo must make an epic quest to the Cracks of Doom in order to destroy it and keep it from being used for evil. Frodo is joined by Gandalf, Legolas the elf, Gimli the Dwarf, Aragorn (Strider), Boromir and his three Hobbit friends Merry, Pippin and Samwise. Through mountains, snow, darkness, forests, rivers and plains, facing evil and danger at every corner the Fellowship of the Ring must go. Their quest to destroy the One Ring is the only hope for the end of the Dark Lords reign. 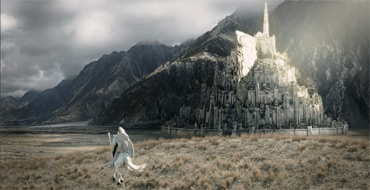 Few films and franchises have made the kind of cinematic and cultural impact that Peter Jackson’s The Lord of the Rings trilogy has. It seems crazy to think that next year marks the 20th anniversary of the first entry into the film series, The Fellowship of the Ring. To kick off the celebration of this masterful series, Warner Bros. is giving the series (and the later prequel trilogy of The Hobbit) the full 4K UHD treatment.

Many 4K releases, you may not realize, are still just the original 2K Blu-Ray mastering, but on a 4K disc. Sure, it’ll still look better than your original Blu-Ray discs (which still look amazing, and worlds better than DVD), but you’re not really seeing true 4K (And, supposedly, there are a couple websites out there that list what releases are “true” 4K). For The Lord of the Rings trilogy, Warner went back to the films’ original negatives and rescanned them at 4K resolution. You’ll immediately notice an incredible clarity upon popping in any of the film discs. The color is super vibrant and just pops from the screen. You’ll be able to see the finest details, like hair and grass and gravel. It’s really quite impressive. I did pop in one of my old Return of the King Blu-Ray discs to see how it compares, and I was shocked at just how really grainy it looked. The clarity was still good, but it just looked so grainy. I also spotted little tiny dust particles occasionally flashing as the Blu-Ray film went by. You won’t see any of that in the 4K. In fact, you may be hard pressed to notice any grain at all. However, in full disclosure, I did watch the movies on my 55″ Sony TV, which is several years old, so it’s possible that newer, larger models will show more grain (but also more detail).

On the other hand, the intense clarity also shows the limitations of the computer effects nearly two decades ago. It seemed as though older versions/resolutions of the film had the benefit of the graininess allowing the practical and digital effects to mesh a little more seamlessly. The 4K UHD clarity pulls them apart more, so it becomes glaringly obvious at times, like when the Fellowship battle the squid outside the Mines of Moria, or the cave troll inside. Gollum, in the later films, benefits from some of the clarity, but it also makes his blending with the physical environment around him diminish. It all may be a minior sacrifice for the addition of such clear and colorful visuals, but I’m sure this will irk some fans. I do find some film grain to be charming and what one expects when watching movies shot on film, but when you see a picture look so real and lively, it’s hard to argue for it. I must say, after watching parts of Fellowship on two different TV’s (I checked it out at a friend’s house and his setup first), I do feel like there is some digital “smearing” in some scenes. A character’s face will look incredibly crisp in one shot, and then sort of soft and hazy in another (kind of like what you might see during streaming). I’m no techno-wiz by any means, so I have no idea what might cause that, but I did notice it throughout the three films on my TV as well – something I don’t usually see on Blu-Ray discs or more recent movies presented in 4K UHD. 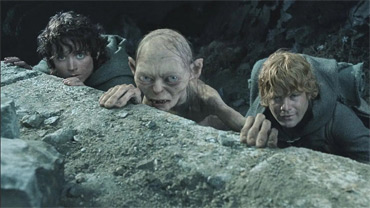 This new 2020 The Lord of the Rings trilogy 4K UHD set includes 9 discs and zero bonus features — yep, you read that correctly! I was pretty surprised myself. The set does include both the Theatrical Versions of the films – on one disc each, as well as each Extended Version split up on two discs for each one (Really, though? We STILL can’t get the Extended Versions onto one disc? Even in 4K?!). The set also includes Digital UHD copies of all 3 films in BOTH versions. The upside to this is that you’ll be able to stream the Extended Versions in 4K in one continuous shot, without having to change discs halfway through. For those wishing there were bonus features, you may want to wait till 2021 to get the 4K disc release. According to Warner’s press release for this set, they’re planning a loaded set for next year: “A 4K UHD “Middle-earth” Ultimate Collectors’ Edition featuring the theatrical and extended versions of all six films, along with new bonus content, previously released Blu-ray discs of The Hobbit Trilogy, and remastered Blu-ray discs of The Lord of the Rings Trilogy will be released in the summer of 2021. The Lord of the Rings Trilogy featuring remastered Blu-ray discs of the theatrical and extended versions of the 3 films will also be released in the fourth quarter 2021, to celebrate the 20th anniversary of The Lord of the Rings: The Fellowship of the Ring.” So if you’re hoping for those Jackson production diaries or making-of featurettes, you may want to hold out.

Now, for the films themselves, I saw each film as they released in theaters back in 2001, 2002 and 2003. I had never read J. R. R. Tolkien’s beloved books, so seeing the movies was my first real experience with the stories. Through the years, I’ve watched them many times just to revisit Middle Earth and their characters again, and they’ve held up really well as modern classics. (Except there are a few characters that get more grating each time I watch it, like John Noble as Denethor in Return of the King. Some of his scenes have me reaching for the skip button like a gunfighter in a duel.) When I saw the Extended Versions of each movie after they released straight to DVD, I found that each movie was exceptionally better in their extended form – especially The Fellowship of the Ring. Some scenes, like the Fellowship’s surreal visit to the elves in the forest where Galadriel dwells, in the Theatrical Version seemed so weird and random; I struggled to figure out what was going on. In the Extended Version, the scene plays out much, much better, with there being a lot more interaction with the elves, and some more time to grieve the loss of one of the Fellowship. Return of the King, although an already long film, benefits greatly from even more little scenes scattered here and there to flesh out some characters. Some of the movies though, especially that one, do add more violence – like orc dismemberments and decapitations and such, but it all stays relatively within the PG-13 rating (despite being gruesome).

Overall, The Lord of the Rings trilogy 4K UHD presentation is truly impressive. The crisp clarity is jaw-dropping, as well as the beautiful punches of color throughout. If you’re a diehard fan with 4K viewing capabilities (you’ll need a 4K player and a 4K TV), you’ll probably want to check out this set. But if you’re one who loves the extras, and don’t own the previous expansive sets, you will probably want to wait till the more complete 2021 release.

Note: The still frames of the films used in this review are NOT taken from the 4K UHD transfers.