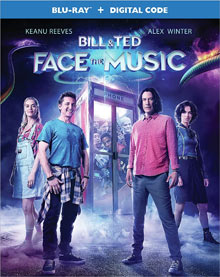 Once told they’d save the universe during a time-traveling adventure, 2 would-be rockers from San Dimas, California find themselves as middle-aged dads still trying to crank out a hit song and fulfill their destiny. (from IMDb) 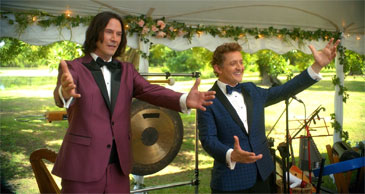 I have a fond memory of being about 9 or 10 years old and sitting down to watch a movie we rented with my dad and older brother. That movie was curiously titled Bill & Ted’s Excellent Adventure. It was about these two dopey, but lovable, metal heads who traveled through time in a phone booth, meeting all kinds of historical figures, all in an effort to avoid flunking out of school. They had become pivotal to the advancement of mankind, and it was imperative that these dim-witted slackers succeeded. I remember loving it, and even my dad enjoyed it, but when the successful movie spawned a bizarrely dark sequel in 1991, titled Bill & Ted’s Bogus Journey, we ended up sitting that one out. Thanks to the magic of online streaming services, I finally got a chance to see it about five years ago, which only confirmed my initial instincts to skip it. In the sequel, a villain from the future sends evil robot versions of Bill & Ted to the past (in this case, the early 90’s) to kill them… and they succeed. While the evil (and more vulgar) copies of themselves turn their lives to ruin in their place, Bill and Ted try to escape the afterlife — first going to Hell — and end up trying to best Death in a series of games in order to win a chance back to life. Obviously, they eventually come back to life, help vanquish their evil doppelgangers, “save the babes,” and launch a successful music career with their band The Wyld Stallyns.

But whatever became of the teenage rockers from San Dimas, California, you may (or may not) wonder? Fast forward 29 years later, and we find Keanu Reeves and Alex Winter reprising their iconic roles one more time for Bill & Ted Face The Music. For the third Bill & Ted installment, we find the duo stuck in a rut, proving inseparable as friends, but washed up as musicians. To make matters worse, their wives (the princesses they rescued from the 1400’s in the first film) are getting tired of their fruitless musical pursuits, and their daughters — Billie and Thea — who are also close friends, want to emulate their dads. But just when the two feel at their lowest, they get another visit from the future and are told that if they don’t write that one song to “unite the world,” reality as they know it will unravel. This sets in motion a series of events that would take them on another time-traveling adventure. 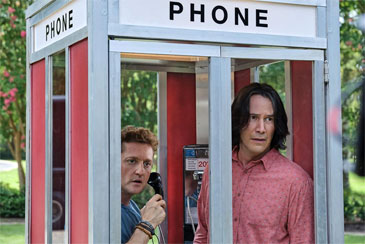 From the start, Bill & Ted Face the Music has a much different feel than the previous films. But while one might expect for it to have the look and feel of a low budget indie film, the team behind this third Bill & Ted outing have done a good job to not skimp on the production here. Where the effects, especially in the 1991 sequel, were fitting for the times, Face The Music feels modernized without feeling too far removed from its predecessors. However, with nearly three decades between sequels, it’s hard for them not to feel pretty distant. I will say that Face The Music does a good job honoring the series without copying either film. Bogus Journey was actually TOO different from the first film, seeming to do the opposite of everything that was so great about Excellent Adventure. Face The Music takes elements of both to make something new, yet still be familiar. It feels like a surprisingly natural continuation that also allows for some wonderful throwbacks to the first film through new characters Thea and Billie taking a trip through time (Can someone say “spin-off?”). While the movie probably isn’t nearly as funny as the first film, it does offer some great moments, and even a couple laugh-out-loud ones, especially when William Sadler reprises his role as Death from Bogus Journey. But one of the most fun segments is easily Billie and Thea’s trip through time rounding up some of the best musicians since the dawn of time (literally). There’s something bittersweet about seeing Bill & Ted past their prime and traveling to the future only to find out their lives get much worse, but Winter and Reeves make it fun nevertheless (although Reeves just seems so much more rigid than he used to be. His blissful grins from the previous films are sorely missed here. He does seems like he’s enjoying himself in the role again, but he seems much more comfortable playing angry future versions of Ted than he does playing the main version).

Thematically, Bill & Ted Face The Music is eerily timely. For a movie that was finished long before the social turmoil reached a boiling point in the U.S, it feels like it was made, instead, in the wake of it. The main theme of the film calls for a universal unity across the cosmos and through the ages. And to achieve this, music is heavily involved. (And apparently Jesus would really enjoy playing the cowbell??) The whole film has kind of an upbeat, scrappy good nature to it, even when it gets a little more serious by sending our heroes to marriage counseling at the beginning. The main plot celebrates music and friendship, and by the time the credits roll, we’re left with a warm fuzzy feeling that is very much needed in this tumultuous year. 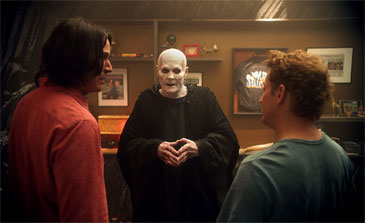 The first two movies were rated PG, but they often included some profanity and the occasional crude, sexual references. Surprisingly, even though it’s been slapped with a higher, PG-13 rating, Face The Music is actually a more tame film than its two predecessors (perhaps even combined?). The MPAA gave the movie its rating “for some language,” but there really isn’t much more than a few uses of “h*ll,” “oh my G-d,” and “d*ck” (although we did see the movie at a drive-in and sometimes the audio on our portable radios isn’t super crisp. But I feel like any significant language would have still stood out). There’s no sexual content apart from some passionate kissing between Missy and her new husband (Yup! She’s back again! And the joke of her multiple husbands is a gift that keeps on giving). There is no graphic violence, but we see some characters get vaporized by a robot’s ray gun briefly, which isn’t gross, but it could possibly disturb some younger viewers. There’s also a pair of future scenes where, in one scene, future Bill tries to shoot Bill & Ted, and later a prison gang beats up and stomps on a futuristic robot (which appears unharmed). One last thing to note is that a future version of Ted turns out to be kind of a drunk, and we see him guzzling vodka straight from the bottle at one point.

Bill & Ted Face The Music is hardly a great movie, but it’s brimming with nostalgia and its heart is firmly in the right place, carrying a positive message that’s not wasted on those of us trying to get by in the topsy turvy 2020. If you liked either of the previous films, Bill & Ted Face The Music should be a fun trip back in time. And while it’s an improvement leaps and bounds over the first sequel, Bill & Ted’s Bogus Journey, it still can’t quite hold a candle to the fun and inventive 1989 film. Bill & Ted are back to Face The Music in 2020, and you can certainly do worse for summer entertainment than this enjoyable little throwback. Oh! And be sure to stay till after the credits finish rolling for one more fun little Bill & Ted scene!

Bill & Ted Face The Music is now available on Blu-Ray disc with a Digital HD copy, and is still available across digital retailers in 4K UHD (but apparently not on 4K disc). Rewatching it at home for the first time (after having only seen it at a drive-in opening weekend), it reinforced for me that this is just a really fun, warm-hearted, enjoyable film. It’s not amazing by any means, but it really is a charming movie. I saw the first film as a kid, so I definitely have a soft spot for these characters. It’s surreal to see Bill and Ted so old after only seeing them as teens before, but seeing them as such inseparable friends is just still so endearing. If you liked either, or both, of the first two films, definitely check this one out.

Along with the feature film (and a digital copy that only seems redeemable through VUDU) are the following extras:

The Official Bill & Ted Face The Music Panel at Comic-Con@Home (43:14) – This is the real meat-and-potatoes of the extras included on the Blu-Ray disc. Actor/director Kevin Smith moderates this panel that features Alex Winter, writer Ed Solomon, Samara Weaving, director Dean Parisot, William Sadler, Brigette Lundy-Paine, writer Chris Matheson, and Keanu Reeves. Smith talks about how Bill & Ted were part of the inspiration for his Jay and Silent Bob characters, and proceeds to interview the cast and crew about how the movie came to be and what it was like to work together on it. They openly discuss some plot elements and give some behind-the-scenes details. It’s a fun watch if you’re a fan of the franchise. (5 bleeped out “F” words, as well as 1 “p*ss,” 1 “d*mn,” and 1 “h*ll”)

Be Excellent to Each Other (1:22) – The rest of the extras on the disc are short promos that each clock in under a minute and a half. This first one talks about the characters very briefly.

A Most Triumphant Trio (1:17) is about the guys and their daughters.

Death’s Crib (1:13) – Last but not least, William Sadler, who plays Death, gives us a quick tour of his home while in character.

Alcohol/Drugs: We see 2022 Ted drinking from a flask; We see some musicians backstage in 1967 drinking; 2025 Bill & Ted share champagne with Bill & Ted; We see 2025 Ted guzzling straight from a bottle of vodka.

Blood/Gore: None, but when characters are vaporized by a robot’s ray gun, we see them rapidly burn away into nothingness.

Violence: Some spoilers ahead: 2022 Bill and Ted smack and wrestle with each other a bit; 2025 Bill & Ted smack each other a bit; 2025 Bill pulls a gun on them and shoots at them. Cops show up, as does the robot. A cop and his van are vaporized by the robot and we see both the cop and the van falling down a bit into Hell; Bill and Ted, with buckets on their head, fall off a balcony into bushes below; A prison gang collecting in the yard threaten to beat up Bill & Ted. The futuristic robot shows up from the future and threatens to kill them. The prison gang attacks the robot and we see from the robot’s perspective as feet come down on him, stomping him (but the robot ends up being fine); A group of people are vaporized together by the ray from the robot’s gun. We then see them falling into Hell, too; We see Hell which has flying creatures and what looks like other souls falling in the sky. The landscape also has lava; A robot tries to kill itself, so a couple characters, who asked to be vaporized, jump in front of the robot’s ray and are also vaporized.