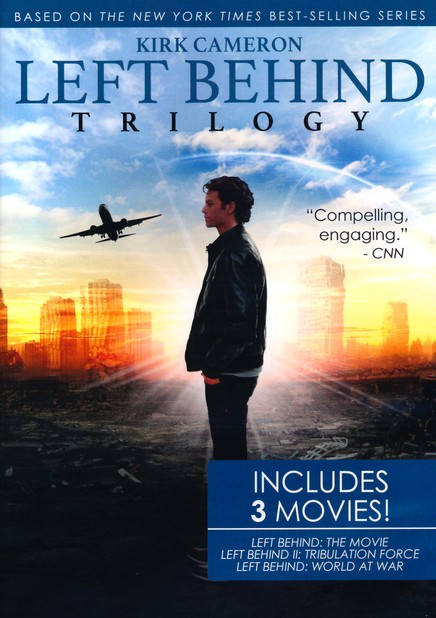 LOS ANGELES, CA – August 6, 2020 — Twenty years ago, conspiracy theories, misinformation campaigns, censorship, and a deadly virus infecting the world were all part of the thrilling plotlines from the LEFT BEHIND movies produced by Cloud Ten Pictures, based on the #1 New York Times Best Seller book series of the same name. Those movies were an overnight success and went on to sell more than ten million copies on VHS and DVD.  Fast forward to 2020 and these ‘plotlines’ are now today’s daily headlines making Cinedigm’s September 1 release more relevant than ever.
Digitally remastered from a new 4K scan from 35MM and with a color upgrade, the 20th Anniversary Edition provides an incredible visual experience that will look great on today’s home entertainment systems.  Based on the description of the end times laid out in the Bible, these movies pair perfectly with the film’s unwavering message of warning, preparedness and most importantly hope and salvation for all. The update also includes a slew of never-before-seen bonus features, including access to a full- length documentary exploring the Rapture with the world’s foremost biblical scholars and theologians.
“The world we see on the news every day is scarier and more uncertain than it has been in at least a generation,” says LEFT BEHIND screenwriter, producer and Cloud Ten Pictures founder Paul Lalonde. “The world foretold in the Bible and dramatized in the LEFT BEHIND films has never been more real than it is now. It’s really happening, exactly as the Bible predicted thousands of years ago.”
The fear and uncertainty of the Book of Revelation comes to life in the LEFT BEHIND TRILOGY. Millions vanish, the society is in chaos, evil is lurking, the world is at war; this is the premise for the ground-breaking faith-based trilogy. Starring Kirk Cameron and Louis Gossett, Jr. the anniversary release features all three iconic films: Left Behind, Left Behind: Tribulation Force & Left Behind: World at War and all new bonus features including: the Hollywood premiere special, cast and crew interviews, additional footage, a candid interview with Kirk Cameron about the importance of faith and a featurette with Louis Gossett, Jr. Dove Approved for 12+ the series has become one of the best known faith-based series, changing the genre’s landscape for years to come.
The LEFT BEHIND TRILOGY was directed by trio of excellent directors Vic Sarin, Bill Corcoran and Craig R. Baxley. The films were produced by Joe Goodman, Ralph Winter, Nicholas Tabarrok, Peter Lalonde and Andre van Heerden. Executive producers include Ron Booth, Paul Lalonde, Peter Lalonde, Bobby Neutz and Edwin Ng.
Here’s the full breakdown of the 2-disc special edition release:
Disc 1:
Left Behind: The Movie – NEW 4K SCAN FROM 35MM
Mass hysteria grips the world when millions of people suddenly vanish into thin air.  The rapture prophesied in the Bible has happened, and those left behind scramble to find the truth in a world of turmoil and deception.
Special Features:
Disc 2:
Left Behind II: Tribulation Force – NEW 4K SCAN FROM 35MM
Journalist Buck Williams (Kirk Cameron) and his “Tribulation Force” try to warn the world that their new world leader is not the Messiah, he is the exact opposite – the one the Bible calls the antichrist!
Left Behind: World at War
The world is now united under one man, Nicolae Carpathia (Gordon Currie) and the violence and mayhem seems to be under control.  But with the help of Buck Williams, American President Gerald Fitzhugh (Lou Gossett Jr) fights back against the supernatural plot to deceive to world
###
ABOUT CLOUD TEN PICTURES
Cloud Ten Pictures has been a producer and pioneer in the Christian film space for more than 25 years. It’s innovative marketing and use of well-known actors paved the way for a stream of successful faith-based films over the past two decades. Cloud Ten’s productions now include 11 feature films and more than a dozen documentaries, all focused on Bible prophecy.
ABOUT CINEDIGM
Since inception, Cinedigm (NASDAQ: CIDM) has been a leader at the forefront of the digital transformation of content distribution. Adapting to the rapidly transforming business needs of today’s entertainment landscape, Cinedigm remains a change-centric player focused on providing content, channels and services to the world’s largest media, technology and retail companies. Cinedigm’s Content and Networks groups provide original and aggregated programming, channels and services that entertain consumers globally across hundreds of millions of devices.