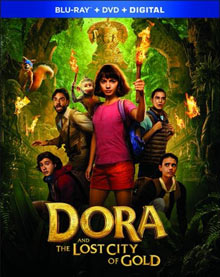 Dora and the Lost City of Gold

Dora, a teenage explorer, leads her friends on an adventure to save her parents and solve the mystery behind a lost city of gold. (from IMDb) 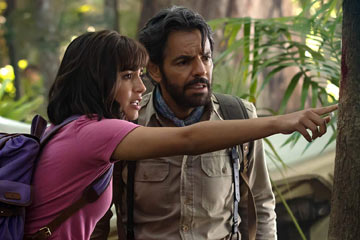 At at time in Hollywood when, if it was once animated, it’s getting a live action translation, it should surprise no one that Dora the Explorer, the beloved childrens’ series, has been the latest property to get such a treatment. Isabela Moner (Transformers: The Last Knight and Instant Family) steps into the title role, breaking her trend of playing an angsty teen full of attitude, and proving she’s actually a pretty versatile actress. She’s adorable as Dora, and she brings every bit of the kind of sweetness you’d expect from the character. Dora and the Lost City of Gold is the classic fish-out-of-water story where a character many people know and love is removed from their usual habitat and dropped into the harsh reality of our modern times. It’s been done time and time again — from George of the Jungle to Enchanted and even Wonder Woman (or Star Trek IV: The Voyage Home, for that matter). If done well, it’s often a lot of fun and a recipe for some great comedy, and Dora and the Lost City of Gold falls much closer to getting it right than not.

Moner makes that charming naivety that’s needed for the story to work seem effortless. Sadly, her cousin Diego has grown up and adapted to the world around him, and is played a bit too woodenly by Jeff Wahlberg. On the other hand, it’s that tension between the two — the childlike passion and wonder that Dora still has, even at 16, and Diego’s complacency to the things the pair used to care so much about together — that makes Dora’s personality and enthusiasm all that more endearing. Comedian Eugenio Derbez is a fun addition to the cast as well. I first learned of him on a short-lived TV series called Rob and always found him entertaining (and honestly the best part about that show). He definitely helps elevate the film. Rounding out Dora’s traveling entourage is Nicholas Coombe, who plays the lovably nerdy Randy, and Madeleine Madden, who plays the hated school know-it-all, but is just too annoying for too long in the film to ever really let the viewer truly warm up to her. Lastly, Dora’s parents are played by Michael Peña and Eva Longoria, who seem perfect as the kind of parents who would raise a sweet girl like Dora, but not all of their humor quite lands (like Peña’s freestyle “rave” music impression). 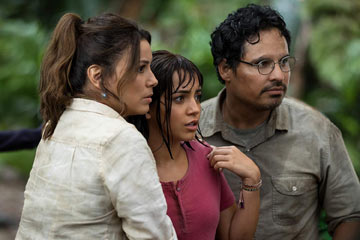 I’m a sucker for a good archaelogical adventure, whether it be the few episodes of MacGyver or DuckTales (both the original 80’s series, that is), and especially the Indiana Jones films. Dora and the Lost City of Gold feels more like “Tomb Raider for kids” than anything, although there are certainly moments of the film that kept reminding me of both DuckTales and Indiana Jones and the Last Crusade (especially the villain’s lust for gold, and the puzzles in the city–one of the latter of which, funny enough, I figured out due to a line in the 1999 version of The Mummy, about what desert people value most). But while there is plenty of peril for our heroes to face and endure, it’s not too scary or violent, and the movie maintains its family-friendly PG rating pretty well. Aside from some spooky moments, I’d say this is a pretty safe film for most ages. It’s surprisingly clever at times, too, as director James Bobin even figures out a way to make a silly nod to the original animated series that becomes one of the most ridiculous-yet-fun moments in the movie. And not all of the humor is over-the-top goofy or corny, which helps broaded the film’s appeal. 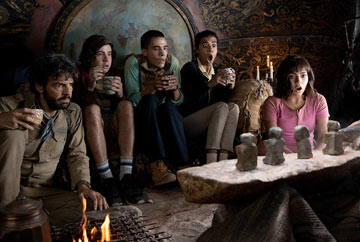 The content of Dora and the Lost City of Gold is quite mild. There is some action, but none of it is ever lethal, and the only language is a rare occasion of “Oh my G-d.” There is no sexual content, but a joke is made about Diego wanting to “mate” with a girl he seems to like, and there’s a prolonged gag about a character pooping in the woods (which Dora, of course, turns into a song–which is pretty funny, albeit kind of awkward). We also briefly see the bare butt of a 2-dimensional, stylized male cartoon character. It’s not realistic and just meant to be funny, but it’s still rather surprising and unexpected when you see it.

Dora and the Lost City of Gold isn’t the kind of movie that’ll make any top ten lists, but it’s fun, sweet, charming, and definitely enjoyable. It also has good values, especially when it comes to teens and how to treat our peers. So, if you grew up with the character (I did not), or have kids that are fans currently, Dora and the Lost City of Gold is a fun little trip down memory lane.

Along with the feature film in HD, the Blu-Ray/Digital combo pack version of Dora and the Lost City of Gold offers some bonus content. The Blu-Ray disc features are as follows:

Bloopers (2:12) – This batch of bloopers is a fun little collection of the actors messing up some lines and having fun on set.

Deleted and Extended Scenes (12:35) – There are 11 deleted or extended scenes viewable individually or through a Play All option. “Dora Hates Chores” shows her chopping wood in the jungle, while “Rave Music” is an extended version of Michael Peña’s impression of club music. “Bathroom Break” sets up Sammy having to go to the bathroom, showing the kids and Alejandro walking through the jungle in the rain and complaining. “Time for Bed” shows the group deciding to stop to sleep (1 “G*d”), while “Bedtime Partners” shows them having to share tree hammocks for the night (with humorous results). It also has a sweet little moment between Dora and Diego that probably should have been left in. “Markers on the Map” is a brief walking montage, “Alejandro Thinks They are Lost” shows him annoyed about walking through the jungle, and “They are on the Right Path” shows Dora following her parents’ journal. “Randy’s in Love” shows him confessing his love to Dora, who just says she loves everyone, while “Swiper’s Speech” gives the character more to say at the end before they scold him (and he happens to reveal that he’s actually 65 years old?!). Finally, “Abuelita’s End Title Song and Dance” shows Diego’s mom (or Grandma?) sitting at a table in front of a blue screen, singing along to the end credits song and dancing. It’s actually kind of awkward.

All About Dora (8:40) features cast and crew talking about the legacy of Dora the Explorer and making the show into a movie. They also talk in depth about her character and enthusiasm. (1 “G*d”)

Did You Say Pelicula? (4:33) is about Eugenio Derbez and his character in the film. Eugenio talks about the role and reveals that he’s always wanted to play an action hero — so much so, that he did his own stunts for this movie!

Dora in Flower Vision (4:16) is about how the animated segment in the film was a nod to the show.

Dora’s Jungle House (3:45) – Here, Isabela Moner gives us a tour of the set that served as Dora’s family’s home.

Sex/Nudity: Dora comments to Diego that “life threatening situations can accelerate the mating process.” Diego tells her not to ever say “mating” again; Two scorpions crawl on top of Alejandro’s head and start fighting–till Dora realizes they’re mating. After he’s rescued, he whines that scorpions were mating on his head; When the world turns completely cartoony in a hallucination, Alejandro–as a 2-dimensional cartoon character–strips off his clothes and runs away naked. We briefly see the unrealistic cartoony representation of his butt as he disappears into the jungle; Alejandro wakes up in real life again and realizes he’s lying naked under a blanket;

Alcohol/Drugs: None, but a couple characters have cartoony hallucinations when a flower spits out spores and they breathe them in.

Blood/Gore: During the closing song, Randy lifts up his shirt to reveal a big nasty and red rash on his side.

Violence: An animated fox, Swiper, flies through the air and crashes into a tree; Dora runs through the jungle chased by elephants and then hops on a crocodile that snaps at her, all the while showing no fear; Dora is startled by bats flying out of a cave; Dora tries to jump a chasm and falls to the ground below. She seems totally fine, but asks her monkey friend Boots to get her parents to help; Randy is briefly shown getting shoved against a locker in the background; Dora’s backpack gets caught in the bus doors and it drives off with her stuck, hanging out of the doors; Villains lock the kids in a crate and throw a can of gas inside that knocks them out; Swiper crashes into a bunch of boxes; Randy throws up outside of the Jeep they’re sitting in, but we don’t really see it; Alejandro guy walks into webs in the jungle and freaks out, running face-first into a tree; Arrows fly by the kids as they run away; Randy thinks he’s hit by an arrow and bleeding, but it’s a juice box leaking in his backpack; They hide inside a log, which is hit by arrows and then rolls down a hill; The gang get sucked into quick sand. Two scorpions crawl on top of Alejandro’s head and start fighting–till Dora realizes they’re mating. He sinks into the quick sand and they pull him out under the cliff side nearby; An old woman in a tribal tent throws something into a nearby fire that causes it to burst. Then she smashes stone figures, startling the kids; The kids and Alejandro fall through a hole in the ground when the rock under their feet gives way; The room then fills with water and they all struggle to get out; Dora knocks a guy out with a yo-yo; Dora trips and falls down a cliff; A poisonous frog stings and knocks out Swiper and one of the mercenaries; A door closes slowly as a spike-covered ceiling descends and the door nearly crushes Dora; The floor tilts, revealing spikes underneath them. We sort of see what look like skulls on the spikes. They slide down and jump over the spikes; The villain falls into a pit but survives, and we see him clinging to the edge; The temple collapses as they all run away; Boots attacks Swiper, pulling his whiskers and stepping on his foot; We see the villain alive but tied up with tribal people having him in captivity.