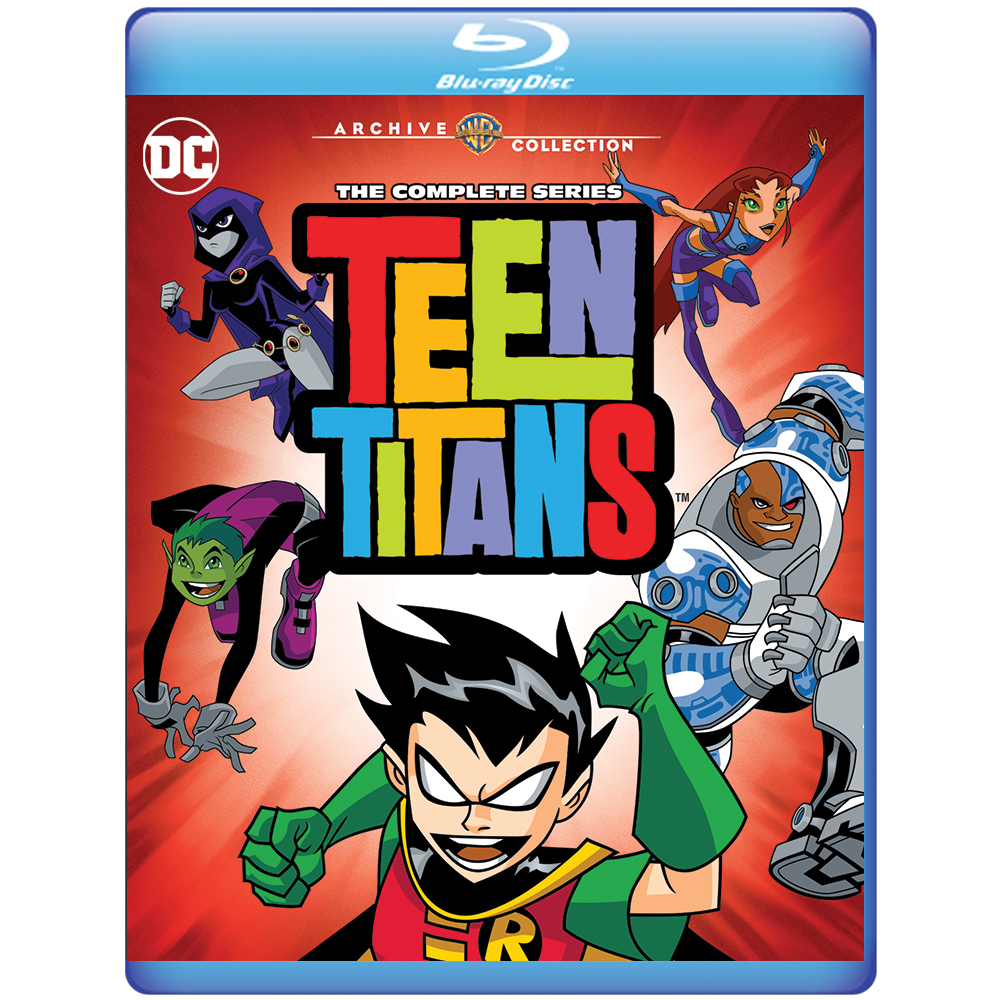 It’s a full plate of crime-fighting and chaos as Robin, Cyborg, Starfire, Raven and Beast Boy go up against killer villains such as Brother Blood, Mad Mod and their archenemy Slade. Get ready for all the big battles and unbreakable bonds that make these friends the unstoppable Teen Titans!

Teen Titans: The Complete Series ran for five seasons (2003-2006), and all 65 episodes are contained in this 6-disc collection. The Special Features include:

They survived the schemes of The Light and saved the Earth from the Reach invasion. But this season on Young Justice: Outsiders, the team will face its greatest challenge yet. Kidnapped teens are being transformed into superpowered weapons! Metahuman trafficking is a terrifying threat to a society caught in the crossfire of a genetic arms race spanning the globe and the galaxy. Now, Nightwing, Superboy, Miss Martian, Tigress, Aqualad and Black Lightning will need help from a new generation of heroes to save the world from the war games of Super-Villains controlling the system from the inside. What’s needed is a team of Outsiders. Produced by Warner Bros. Animation and DC, the DC Universe Original Series’ enthralling third season arrives on November 26, 2019.

BLACK LIGHTNING: THE COMPLETE SECOND SEASON (DVD)
Jefferson Pierce (Cress Williams) is a man of many faces. A former Olympic athlete, respected educator and father of two, he’s also Black Lightning, superpowered protector of Freeland. But Jefferson is not alone. His oldest daughter, Anissa (Nafessa Williams), is a med student, part-time teacher and social activist. She is also the Super Hero known as Thunder, possessing invulnerability and super strength for as long as she can hold her breath. Jefferson’s youngest daughter, Jennifer (China Anne McClain), is a fiery teen who inherited her father’s athletic gifts but not his desire to be an athlete. Jennifer also inherited his powers. Her body generates pure electrical energy, and she possesses the potential to be more powerful than Anissa or Jefferson. Lynn (Christine Adams), Jefferson’s ex-wife, is fast becoming an expert in metahuman medicine. Together, the Pierce family fights the gang known as the One Hundred for the soul of Freeland. Now available.

MAN FROM ATLANTIS (1977) (New 2019 1080p HD Master)
Shortly before ascending to the status of true TV icon thanks to his portrayal of good guy Bobby Ewing on the landmark TV series Dallas, Patrick Duffy played another sort of good guy in a series of Sci Fi action epics that spawned a short-lived TV series. Storm-tossed and washed ashore, an amnesiac man (Duffy) is rescued from certain death thanks to the insights of Navy doc Elizabeth Merrill (Belinda Montgomery), who realizes that her patient has a most amphibious nature. Dubbed Mark Harris, the man exhibits a host of extraordinary aquatic abilities – gills, strength, speed, webbed hands and feet, enhanced vision and more. While Dr. Merrill and Mark attempt to uncover the mystery of his origins, a new menace arises in the form of genial genius (and quite mad) scientist Dr. Shubert (Victor Buono), a marine eco-terrorist with world conquering aims. Produced by Star Trek veterans Robert Justman and Herbert Solow under the auspices of Hanna-Barbera’s live action wing, the Man from Atlantis TV movies successfully blended thoughtful, Eco-aware Science Fiction and Superheroic Action/Adventure for a concoction as wild and woolly as the deep blue sea. Seldom seen in the US after its initial run, Mark Harris’ adventures proved an overseas syndication smash. Revisit the birth of a legend as never seen before thanks to this sea-sparkling crystal-clear transfer in 1080p HD! Now available.

Warner Archive Collection (WAC) continues to serve as host to some of the most beloved films, television series and animated entertainment in history – and many are now available on Blu-ray. WAC’s canon runs the gamut from restored and remastered Blu-ray classics such as The Americanization of Emily, The Big Sleep, The Great Race, She Wore a Yellow Ribbon, Victor/Victoria and Yankee Doodle Dandy to adored contemporary and classic TV offerings ranging from Crazy Ex-Girlfriend, Longmire and The Kominsky Method to Alice and Family Matters . The WAC library also includes feature-length animated films, like the Blu-ray release of Batman: Mask of the Phantasm, and animated TV series headed by Blu-ray releases of such popular offerings as Justice League Unlimited and Young Justice and a wealth of classic animated series on DVD including dozens of Hanna-Barbera classics – like Jonny Quest: The Complete Original Series and Wally Gator: The Complete Colleciton; as well as a treasure trove  of offerings for serious collector, like Porky Pig 101 and the recent release of three volumes of Popeye The Sailor: The 1940s. WAC offerings can be found via wb.com/warnerarchive and your favorite online retailer.