BASED ON A TRUE INSPIRATIONAL STORY OF FAITH,
BREAKTHROUGH ARRIVES ON DIGITAL JULY 2 AND
4K ULTRA HD

“YOU DON’T HAVE TO BELIEVE IN DIVINE INTERVENTION TO BE
MOVED BY THIS STORY”
– Bilge Ebiri, The New York Times 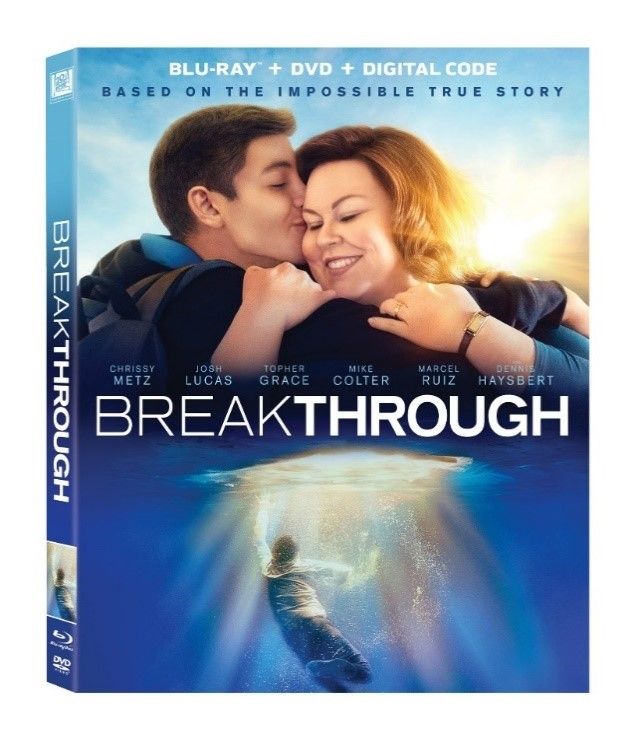 BREAKTHROUGH was the #3 film at the box office it’s opening weekend, eventually drawing more than $50MM worldwide, and continuing the trend of successful stories of faith being told on the big screen. With an A Cinemascore (one of the top nine films scored by audiences this year), Joyce Smith’s story of faith resonated with families everywhere.

“BREAKTHROUGH’s home entertainment release gives us an opportunity to showcase some of the incredible footage grabbed on set that we couldn’t include in the theatrical experience,” said DeVon Franklin, Producer of BREAKTHROUGH and well-known to faith audiences for theatrical hits including MIRACLES FROM HEAVEN and THE STAR. “We included deleted scenes and bonus features with never-before-seen footage with cast and crew shot during the film’s production.”

When Joyce Smith’s (Chrissy Metz) adopted son John (Marcel Ruiz) falls through an icy Missouri lake, all hope seems lost as John lies lifeless. In the face of every bleak medical case history and dire scientiﬁc prediction, Joyce’s unwavering belief inspires her community to pray for John’s recovery. Based on the incredible true story, BREAKTHROUGH is an enthralling reminder that faith and love can create a mountain of hope, and sometimes even a miracle.

Along with producer DeVon Franklin (MIRACLES FROM HEAVEN), the film was adapted for the screen by Grant Nieporte (SEVEN POUNDS) from Joyce Smith’s own book (The Impossible). BREAKTHROUGH stars Chrissy Metz (This is Us), Josh Lucas (Yellowstone, SWEET HOME ALABAMA), Topher Grace (SPIDER-MAN 3, That ‘70s Show), Mike Colter (Luke Cage), Marcel Ruiz (One Day at a Time), Sam Trammell (This is Us, True Blood), and Dennis Haysbert (24). BREAKTHROUGH is directed by Roxann Dawson (House of Cards, The Americans).

Awarded the Dove Seal of Approval for All Ages, BREAKTHROUGH’s message of hope and community will inspire the whole family.

and DVD Bonus Features Include:

, 4K Ultra HD, Digital and VOD (video-on-demand). Each year TCFHE introduces hundreds of new and newly enhanced products, which it services to retail outlets and digital stores throughout the world.

ABOUT FRANKLIN ENTERTAINMENT
Franklin Entertainment is a dynamic multi-media entertainment company that is an industry leader in developing and producing mainstream inspirational content. Helmed by producer, best-selling author and spiritual success coach, DeVon Franklin. The company has a multi-year first-look film deal with 20th Century Fox. The company has produced such hits as the animated feature film THE STAR and the inspirational true story MIRACLES FROM HEAVEN.