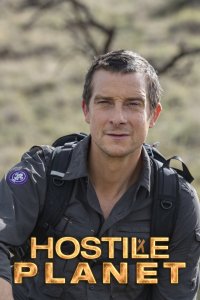 This is not your mother’s nature series.

Executive produced by Academy Award-winning cinematographer and director Guillermo Navarro (“Pan’s Labyrinth”), Emmy-nominated producer Martha Holmes (“The Blue Planet”), Emmy Award-winning Tom Hugh-Jones (“Planet Earth II”), BAFTA winner Delbert Shoopman (“The Island”) and BAFTA winner Bear Grylls (“The Island”) – who also serves as the series’ host and narrator – Hostile Planet draws attention to the most extraordinary — almost supernatural — accounts of animals that have adapted to the cruelest evolutionary curveballs. The series zooms in on the world’s most extreme environments to reveal the animal kingdom’s most glorious stories of survival on this fast and continuously shifting planet.

Hostile Planet is the next generation of wildlife filmmaking that builds a compelling, current and dramatic narrative through each episode, establishing characters with its six distinctive biomes and the animals that call them home. Hostile Planet acknowledges the world is rapidly changing and that the challenges animals face are different than how they’ve always been. Each titular episode – mountains, oceans, grasslands, jungles, deserts and polar –  navigates the brutal conditions endured by some of the most complex, unrelenting and awe-inspiring species on the planet. As animals face an overwhelming host of challenges including punishing weather, intense competition for resources and constant predator-vs.-prey conflict, life still finds a way.

Please contact me for screeners or interview requests with Bear Grylls.

The highest mountains on Earth are home to snow leopards, golden eagles, mountain goats, barnacle goslings and gelada monkeys. But only the toughest can endure the extreme weather, scarce food supplies and limited oxygen on these peaks. Showcasing never-before-filmed animal behavior using new technology to capture fresh angles and scales, Hostile Planet provides unique access to one of the most extreme environments on the planet.

Delve beneath the surface of the largest habitat on Earth – our oceans – to uncover a world of extraordinary extremes from crushing depths to stormy coasts and vast blue deserts to crowded reefs. Oceans are dynamic environments where animals must adapt to life of constant change. Discover how seals fend off sharks; how turtles risk their lives to create their next generation; and how ingenious orca fight to survive in the face of ever-increasing competition.

Grasslands are home to the biggest stars of the animal kingdom, but top billing doesn’t make life here any easier. The wildernesses are among the most volatile environments on Earth, where animals must endure an ever-shifting rollercoaster journey through freeze, fire, flood and drought. Now, seasons are becoming more extreme and unpredictable. Life is harder than ever for the wildlife featured in this episode of Hostile Planet, including bull elephants clashing in mating battles; the predator-and-prey dance between cheetahs and gazelles in the depths of the Kenyan savanna; a herd of bison battling a blizzard in the North American plains; and a huge pack of wolves in pursuit of them.

Plenty of water, warmth and light provide perfect conditions for life to survive, which make the jungle the most diverse habitat on Earth. But make no mistake, the rainforest is no Eden. As rains become increasingly unpredictable, only the most resilient species will triumph. This episode of Hostile Planet spotlights the fiercest jungle species both obvious and unassuming, including jaguars, caimans, gibbons, orangutans, spectral tarsiers, hummingbirds and even parasites. Discover why survival of the fittest amid this crowded and competitive world has never been more apparent.

The planet’s hottest habitats – our deserts – are getting even hotter, drier and bigger, yet a host of remarkable animals still survive in the harshest conditions, including cunning hyenas, pint-sized meerkats and sand-dwelling spiders. Follow their lives through a single day in the desert to appreciate how they deal with the sun’s formidable power as it grows stronger with every passing minute.

Step inside the most frigid habitat known to Earth – the poles. Here, the  planet’s ultimate survivalists include whale-hunting polar bears, leopard-seal dodging penguins and a pack of Arctic wolves that bring down a pair of musk oxen. Polar species have evolved bodies and behaviors that help them combat the intense hostility of their habitats. But now, their world is changing so fast – literally breaking apart under their feet – and their resilience will be tested beyond the extreme.