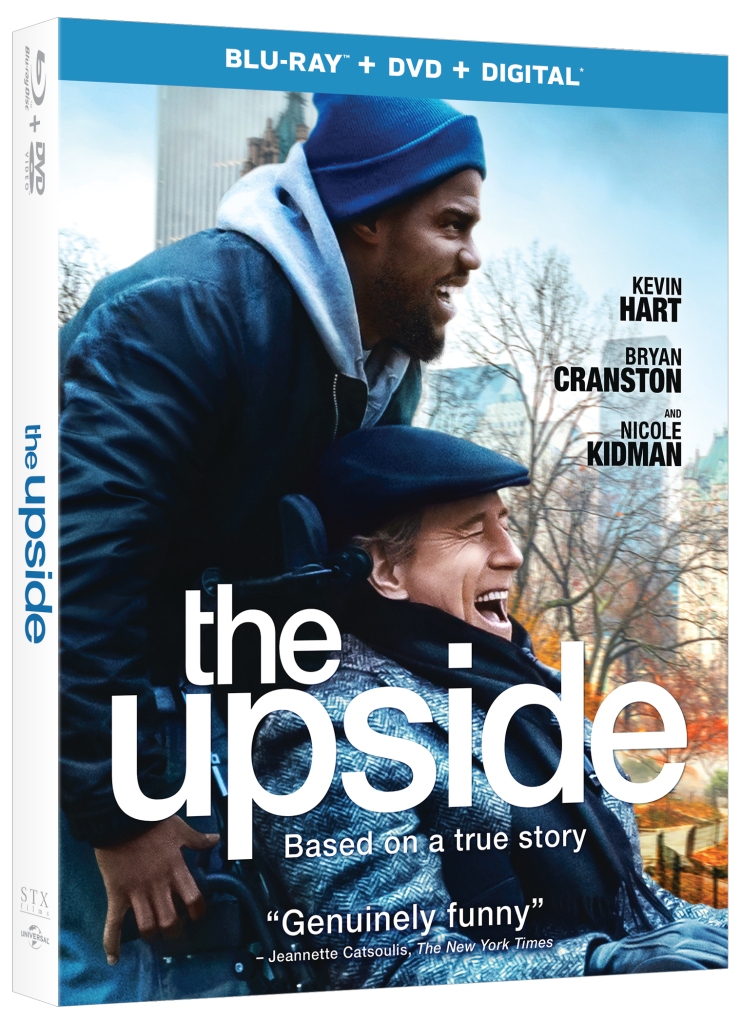 Universal City, California, March 21, 2019 – Kevin Hart (Night School, Ride Along) and Bryan Cranston (Trumbo, “Breaking Bad”) pair up to tell the inspirational true story of a genuine and unique friendship in the fun and moving comedy The Upside, debuting on Digital on May 14, 2019 and on Blu-rayTM Combo Pack, DVD and On Demand on May 21, 2019 from STXfilms, Lantern Entertainment and Universal Pictures Home Entertainment. From acclaimed director Neil Burger (Divergent, Limitless), the film follows a discouraged out-of-work ex-con and a wealthy quadriplegic who unexpectedly come together and help each other bring back their zest for life.

A “funny and warmhearted buddy comedy” (Pete Hammond, Deadline) grounded in real emotion, The Upside earned an “A” CinemaScore from moviegoers and features a stellar supporting cast including Nicole Kidman (Aquaman, “Big Little Lies”), Golshifteh Farahani (Paterson, Boutique), Julianna Margulies (“The Good Wife,” “ER”), Aja Naomi King (The Birth of a Nation, “How to Get Away with Murder”), and Tate Donovan (Argo, “Damages”).

Recently paroled ex-convict, Dell Scott (Hart) strikes up an unusual and unlikely friendship with a quadriplegic billionaire, Phillip Lacasse (Cranston) in this hilarious and heartfelt comedy. From worlds apart, Dell and Phillip form an unlikely bond, bridging their differences and gaining invaluable wisdom in the process, giving each man a renewed sense of passion for all of life’s possibilities.

The Upside on Blu-rayTM, DVD, and Digital comes loaded with special bonus content including a gag reel, deleted scenes, behind-the-scenes featurettes, and a breakdown of the onscreen chemistry between Kevin Hart and Bryan Cranston.

The Upside will be available on Blu-ray™, DVD and Digital.

Based on the Motion Picture: “Intouchables” by Éric Toledano and Oliver Nakache

STX Entertainment is a global, next-generation media company whose mission is to unlock the value of the direct connection stars have with their fans through the development, financing, production, marketing and distribution of film, television, VR, digital video, music and live entertainment content.  It is the industry leader in transforming beyond traditional platform-driven content to creating talent-driven enterprises.