From lovable live action classics like the Homeward Bound films and Good Boy!, to imaginative, animated movies like the Ferndinand and Isle of Dogs, HBO NOW has all the entertainment you’ll need to cozy up with pets and family for #LoveYourPetDay! 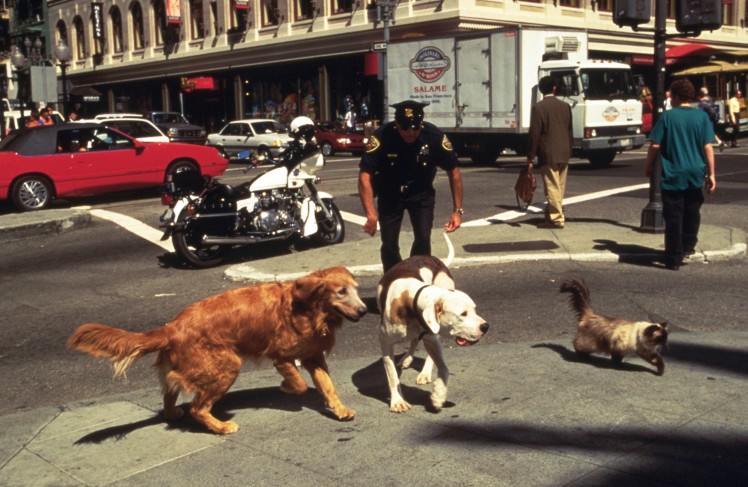 Three family pets undertake a harrowing wilderness journey to return to their home in this remake of the 1963 family favorite.

Chance, Shadowand Sassy are back in this fun-filled sequel that finds them on the loose in San Francisco trying to find their way home.

A lonely young boy adopts a stray dog that becomes his best friend, unaware that the pup is actually an alien planning a canine invasion on Earth.

March of the Penguins
Narrated by Morgan Freeman

Oscar®-winning documentary about the amazing annual journey of the emperor penguins of Antarctica.

Friendly wolves Kate and Humphrey are back, ready to spend the holidays with their three young pups…until the youngest disappears, sparking a desperate search to find him.

Kate and Humphrey’s pups seek to solve a ghostly mystery involving a creepy cave in this fourth film in the animated wolf series.

A family vacation goes awry when Kate, Humphrey and their trio of wolf pups cross paths with a pair of human trappers who are out to relocate wolves.

The Land Before Time

The five dinosaur friends find themselves in prehistoric trouble when they accidentally bring a baby T-Rex into the plant-eating paradise of Great Valley in this adventurous animated sequel.

When grandpa falls ill, Littlefoot takes it upon himself to journey to the Land of Mists to find a rare flower that can help him.

A desperate hunt for food leads Littlefoot and his dinosaur friends to an island full of fresh plant life—and fearsome creatures—in this fifth film in the animated adventure series.

The kid brontosaurus and his pals brave the lands beyond Great Valley to rescue their community after a meteorite plugs their waterway in this third animated adventure in the ‘Land Before Time’ series.

Littlefoot and his young pals deal with dangerous ‘sharp tooths’ and a run of bad luck after they damage the legendary Saurus Rock.

When a brilliant meteor crashes to earth, the young dinosaurs race to find it, believing it may be the legendary Stone of Cold Fire.

The dinosaurs face their greatest challenge yet when a deep freeze envelops the valley and threatens their food supply.

After heavy rains create a new body of water, Littlefoot and friends meet a dolphin-like creature who is a long way from home.

Instincts lead Littlefoot on a journey with his fellow longnecks that introduces him to his long-lost father.

A courageous owl launches a quest to locate the legendary defenders who can save his species in this animated adventure.

Ferd is the Word! From the creators of “Ice Age” and “Rio,” comes this endearing animated tale about a friendly bull (voice of John Cena) whose peaceful life is shattered when he is forced to return to the ultra-violent life in the bullfighting ring.

When a devious mayor exiles all dogs to Trash Island, his nephew/ward Atari journeys there to find his beloved dog Spots.

In this animated comedy, an accident leaves a shark named Frankie sleeping with the fishes. When he is given credit for Frankie’s death, a young fish named Oscar gets in deep water.

A fearless little mouse sets out on an unlikely quest to restore his disgraced kingdom to prominence in this animated tale.

The Tale of Peter Rabbit
Narrated by Carol Burnett

Peter Rabbit’s mother told him to stay out of Farmer McGregor’s garden, but Peter couldn’t resist…and almost ended up in a rabbit pie!