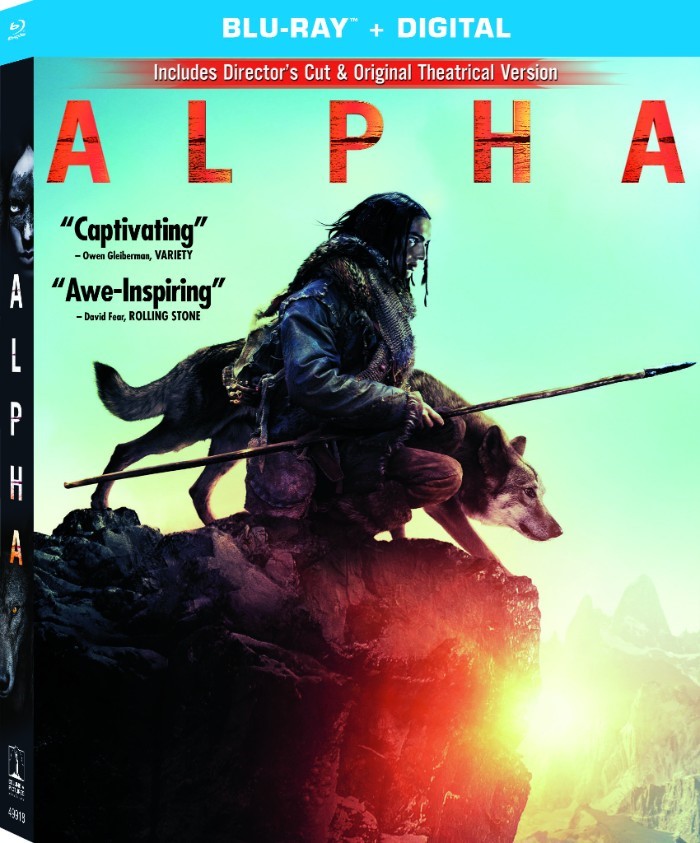 CULVER CITY, Calif. (October 1, 2018) –  Journey 20,000 years ago to the last Ice Age with the visceral adventure between man and wolf in ALPHA, available on Digital and redeemable via the Movies Anywhere App on October 30 and arriving on Blu-ray and DVD November 13 from Sony Pictures Home Entertainment. Directed and co-written by Albert Hughes (The Book of Eli), ALPHA is a visually stunning tale centered on the relationship between man and man’s best friend, as they are forced to rely on each other to survive the harsh and unforgiving wilderness.

The impending winter season leads a fearful seventeen-year-old Keda (Kodi Smit-McPhee, Let Me In, X-Men: The Apocalypse) to accompany his father Tau (Jóhannes Hakur Jóhannesson, “Game of Thrones”) and other members of the Cro-Magnon tribe to go on their annual bison hunt, where fate leaves the young boy critically injured and alone. Survival instincts kick in as Keda discovers his way back home while also finding a new friend during his barbaric feat. Including a diverse cast from all over the world, ALPHA also stars Leonor Varela (Blade II), Marcin Kowalcyk (“You are God” and “Hardkor Disco”), Jens Hultén (“M15 Rogue Nation”), Natassia Malthe (Elektra) and Spencer Bogaret (Vincent).

The Blu-ray, Digital release contain gripping never-before-seen content, including a Director’s cut, Alternate Opening and Endings as well as three additional deleted scenes with Director Commentaries, and four behind-the-scenes featurettes. In “The Wolf Behind Alpha,” fans learn all about Chuck, the dog/wolf hybrid actor playing Alpha and learn what made him so popular on set. Audiences get an inside look into the training that Chuck and Kodi Smit-McPhee went through to create a real-life bond in “Boy & Wolf.” Hear the cast and crew discuss creating this never-before-seen film with insights into the creation of the stunning visuals with visual effects, new language, extensive research on artifacts, costumes and more in “Building the World.” In a “Hero’s Journey,” Kodi leads the conversation about what it was like playing such an emotional character and his character’s development through the film.

Synopsis:
An epic adventure set in the last Ice Age, ALPHA tells a fascinating, visually stunning story that shines light on the origins of man’s best friend. While on his first hunt with his tribe’s most elite group, a young man is injured and must learn to survive alone in the wilderness. Reluctantly taming a lone wolf abandoned by its pack, the pair learn to rely on each other and become unlikely allies, enduring countless dangers and overwhelming odds in order to find their way home before winter arrives.

Blu-ray and Digital Bonus Materials Include:

ALPHA has a run time of approximately 96 minutes and is rated PG-13 for some intense peril.

The Movies Anywhere Digital App simplifies and enhances the digital movie collection and viewing experience by allowing consumers to access their favorite digital movies in one place when purchased or redeemed through participating digital retailers. Consumers can also redeem digital copy codes found in eligible Blu-ray™ and DVD disc packages from participating studios and stream or download them through Movies Anywhere.  Movies Anywhere is available only in the United States.