‘The Song of Bethlehem’ Film Premieres at SteelStacks March 18

Investigative music documentary by recording artist & filmmaker Ken Goldstein tells the story of a song and a town that was 30 years in the making; public invited to attend free 8 p.m. screening. 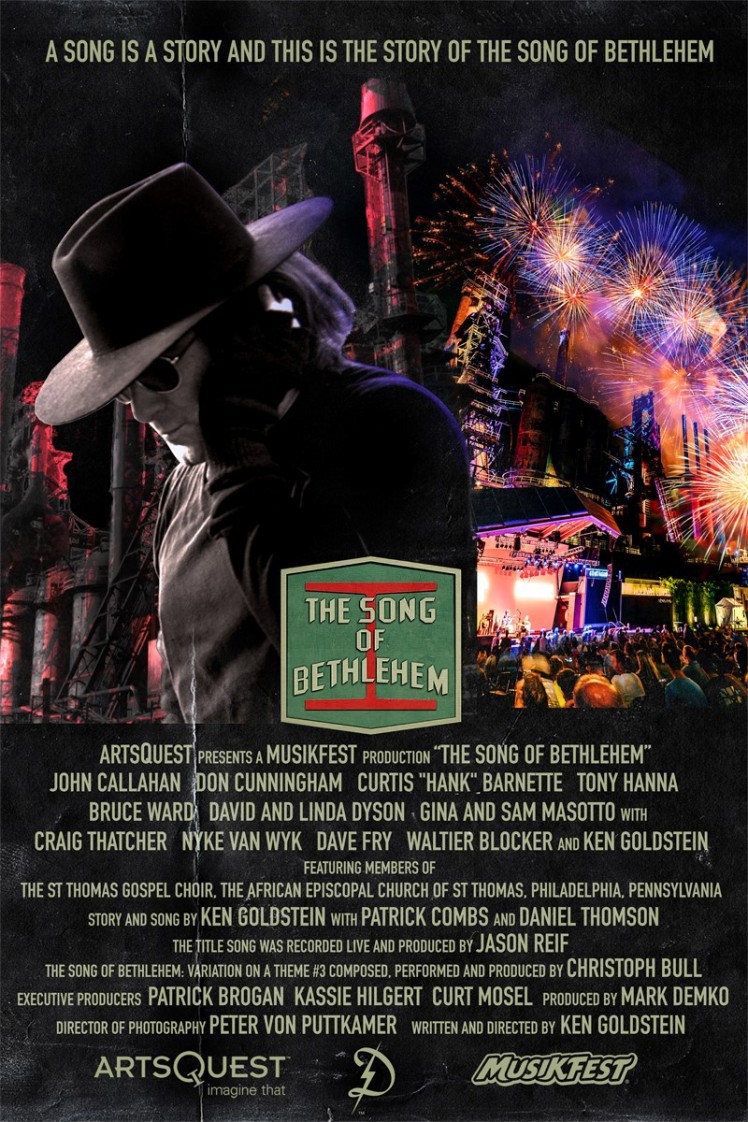 BETHLEHMEHM, PA–Thirty years ago, as a student at Syracuse University, Chicago native and aspiring musician Ken Goldstein visited the Buffalo area and got a glimpse of how the closing of the local steel mill in Lackawanna, N.Y. put thousands out of work and gutted a community. In the ensuing days, he penned a song, “Bethlehem Steel,” that he’s carried with him throughout his career.

Now the frontman for Los Angeles-based touring band The LA Hustle, Goldstein last summer visited another former one-industry town – Bethlehem, Pa. – and got an entirely different take on what it means to be an ‘old’ steel town. Performing on opening night of Musikfest, the musician was inspired to once again pick up his pen and his guitar, breathing new life into the song he first wrote three decades ago. The result is “The Song of Bethlehem,” a song of triumph over tragedy and the power of ‘community’ in overcoming obstacles.

On March 18, 8 p.m., the ArtsQuest Center at SteelStacks will host the World Premiere of the 30-minute documentary film “The Song of Bethlehem,” which tells the story of Goldstein’s return to the Christmas City last December to lay down the vocals and music for “The Song of Bethlehem,” in the place it was meant to be recorded – on the old Bethlehem Steel plant on the city’s SouthSide. The singer-songwriter took up residence in the former Steel Turn & Grind Shop at SteelStacks, recording a new version of the song with renowned Lehigh Valley musicians Craig Thatcher, Nyke Van Wyk and Dave Fry, along with The St. Thomas Gospel Choir of the African Episcopal Church of St. Thomas in Philadelphia.

“I don’t believe any song I’ve ever written has an end,” Goldstein says. “A beginning, yes; a middle of course. But songs are like towns, their endings are always new beginnings. I saw this documentary as an opportunity to not just investigate the town of Bethlehem and its incredible transformation, but also my own evolution as a songwriter. It’s a very rare occasion that an artist is given an opportunity to publicly investigate his own journey.”

An Emmy Award winning filmmaker, Goldstein is also a successful recording and touring artist (under both his name and his popular stage persona, Jack Dempsey) and the author of the best-selling self-help book, “The Way of the Nerd: Practical Advice for Impractical People.”

Goldstein grew up in Northbrook, Ill., which is the setting for several of the classic films of late director John Hughes, who attended Northbrook’s Glenbrook North High School.  He can be briefly seen in Hughes’ films “Ferris Bueller’s Day Off” and “Sixteen Candles,” as these films were shot during the years Goldstein attended Glenbrook North High School. Goldstein was then asked to perform with Hughes, who was also a musician and a songwriter, at several events, including a performance of “Good Love” in front of a gymnasium filled with students. Years later, during the completion of the film “Curley Sue,” Hughes hired Goldstein to be one of his personal and creative assistants, a position that lasted until the end of production on the film “Home Alone 2.”

During his career, Goldstein has worked as a photojournalist for The New York New Times, writer for The Chicago Tribune and as a television news commentator and field reporter for FOX News and NBC. He also wrote, directed and produced television for A&E Network, The History Channel, BET, TF-1, BBC, PBS, Fox Broadcasting Company and NBC.

“The people that I met and the places I was able to visit during our shoot in Bethlehem in December reminded me of my life in Portland, Oregon in the 1990s, as well as my time in Austin in the 2000s,” says Goldstein. “Those towns were reborn and were experiencing an emergence of art, culture and community that was being invented every day. I felt that way in Bethlehem. Like every day there was a new reason to feel inspired.”

In the coming months, Goldstein plans to take “The Song of Bethlehem” film to select film festivals across the nation, coupling the screenings with performances where possible, to help share the story of how one former industrial town found success in the aftermath of its largest employer closing. This summer, Goldstein will also return to the Lehigh Valley as ArtsQuest’s 2018 Artist in Residence, performing at the Levitt Pavilion Summer Concert Series and at Musikfest.

“My mission is to get as many people as possible in as many economically depressed towns in America as possible to see ‘The Song of Bethlehem,’ whether that be through public screenings during my 2018 national tour or through events, theatrical releases or television and broadcast presentations,” Goldstein says. “This film is a great inspiration to any community that hasn’t been able to find the right way to move forward after a natural or economic disaster has struck. I also believe what we created is an allegory for what all of us can do inside ourselves to find a way to not just survive our personal tragedies but to learn from them, to grow from them, and to create a future for ourselves based on both an appreciation for our history and an openness for what is to come next.”

Free tickets to ‘The Song of Bethlehem’ premiere March 18, 8 p.m., can be requested in advance by calling ArtsQuest at 610-332-3378 or visiting the ArtsQuest Center at SteelStacks. Donations are welcome, with all contributions helping to underwrite the production of the film.