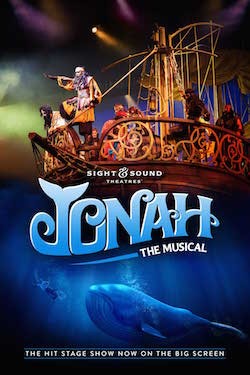 “When it opened in 600-plus movie theaters last May, JONAH: The Musical! blew open a new chapter for us,” Sight & Sound CEO Matt Neff said.  “Now it can travel with anyone almost anywhere–on iTunes, Amazon, Google Play and other digital platforms.”

When God calls Jonah to offer mercy and forgiveness to the people of Nineveh, Jonah runs straight . . . in the opposite direction. After that, one bad choice leads to another, and soon Jonah’s “getaway” ship is on the verge of destruction in a terrible storm. To save themselves, the ship’s crew tosses Jonah overboard and into the waiting mouth of one ginormous fish. But as Jonah discovers, God will offer anyone another chance—Ninevites as well as runaway prophets.

The original live stage show of JONAH debuted in 2012 at Sight & Sound’s theater in Lancaster, then traveled to its Branson, Missouri, theater for the 2014-15 season. An encore season in Pennsylvania runs this year through Oct. 14. For this audience favorite, JONAH flowed to the movie screen as a natural next step.

“Sight & Sound uses unique and creative storytelling to engage as many people as possible in the Bible,” Josh Enck, executive producer of Jonah and chief creative officer of Sight & Sound, said. “With this filmed version of JONAH, the Sight & Sound experience extends fto a whole new audience.”

JONAH: The Musical! is distributed by Virgil Films.

For tickets and other information, visit sight-sound.com

SIGHT & SOUND THEATRES® OVERVIEW
Sight & Sound® takes theater to a whole new level. Every show is an epic experience with a meaningful message. Edge-of-your-seat action meets heartfelt drama on a panoramic stage. Surround yourself with uplifting Bible stories brought to life by an exceptional cast, spectacular special effects, massive sets and live animals — on stage and in the aisles.