Bring Home the Final Chapter in the APES Trilogy on Digital October 10th and on 4K Ultra HD™, 3D Blu-ray™, Blu-ray™ and DVD on October 24

Special Features Include Six Documentary Featurettes, Deleted Scenes, Audio Commentary with the Director and Much More 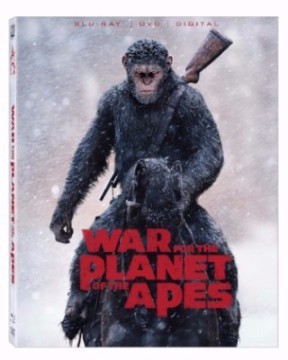 LOS ANGELES, CA (Sept. 7, 2017) – Twentieth Century Fox Home Entertainment presents WAR FOR THE PLANET OF THE APES. Certified Fresh on RottenTomatoes.com and “one of the very best films of the year” (Kristopher Tapley, Variety) arrives on Digital October 10 and on Blu-ray™, 4K Ultra HD™ and DVD October 24. Andy Serkis returns as Caesar in the thrilling and climatic chapter of the PLANET OF THE APES saga as Caesar and his apes are forced into a deadly conflict with an army of humans led by a ruthless Colonel (Woody Harrelson). After suffering unimaginable losses, Caesar resolves to avenge his kind, pitting him against the Colonel for a final showdown that will determine the future of the planet!

Special features include exclusive deleted scenes with optional audio commentary by director Matt Reeves, behind-the-scenes featurettes, including “All About Caesar,” which focuses on Andy Serkis and his incredible performances through the three films as Caesar, bringing his character and his journey to life. Additionally, the digital version of the film includes 10 Scene Comparisons, showing a side-by-side exploration of the actors’ performance captures above the final scenes in the film.

WAR FOR THE PLANET OF THE APES is directed by Matt Reeves with Peter Chernin, Dylan Clark, Rick Jaffa and Amanda Silver serving as producers.

In addition to the WAR FOR THE PLANET OF THE APES standalone edition, the PLANET OF THE APES TRILOGY will also be available on October 24. From green-eyed infant ape to hardened warrior to leader of his kingdom, re-live the the spectacular sci-fi adventure that begins when a failed experiment gives a baby chimpanzee human-like intelligence, but also creates a virus that nearly destroys mankind. When Caesar’s ape community is discovered by a small band of humans, both species must battle to survive. Ultimately, after suffering unimaginable losses, Caesar resolves to avenge his kind, pitting him against a human army in an epic showdown that will determine the future of the planet. Packed with thrilling action and mind-blowing visual effects, this must-own series is hailed as “one of the greatest trilogies in movie history!” (Scott Mantz, Access Hollywood)

WAR FOR THE PLANET OF THE APES Digital Special Features Include:

WAR FOR THE PLANET OF THE APES DVD Special Features Include:

WAR FOR THE PLANET OF THE APES Blu-ray Special Features Include:

ABOUT TWENTIETH CENTURY FOX HOME ENTERTAINMENT
Twentieth Century Fox Home Entertainment, LLC (TCFHE) is a recognized global industry leader and a subsidiary of Twentieth Century Fox Film. TCFHE is the worldwide marketing, sales and distribution company for all Fox film and television programming, acquisitions and original productions as well as all third party distribution partners on DVD, Blu-ray™, 4K Ultra HD, Digital, and VOD (video-on-demand). Each year TCFHE introduces hundreds of new and newly enhanced products, which it services to retail outlets and digital stores throughout the world.