IN ‘THE FIGHT WITHIN’

Producers Aim for a Wide Audience with Faith, Fists and Romance 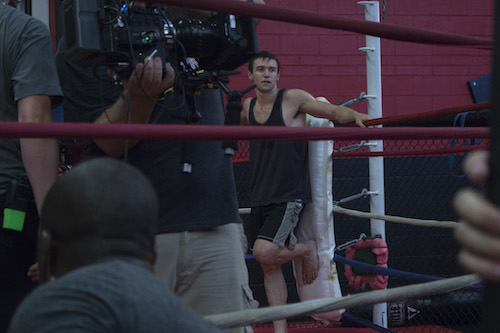 TUSCALOOSA, Ala. – July 6, 2016 – THE FIGHT WITHIN—a muscular faith film set in the rough-and-tumble world of MMA (mixed martial arts)—premieres in limited theatrical release, nationwide, Aug. 12, from GVN Releasing. With a mashup of faith, fighting and romance, the film’s producers aim to attract a wide audience.

“Faith films tend to draw faith audiences,” Jim Davis, executive producer and screenwriter, said. “This movie should also engage people with no sense of faith because inner struggle is universal. A cage and a fight are spot-on metaphors to show a young man coming to terms with who he is and what life brings.”

As the film develops, THE FIGHT WITHIN tells a story of courage, hope, love and growing faith in God. Meanwhile, in Davis’ words: “A bare-knuckled mixed martial arts action film is not a traditional faith-based film, but we hope to engage a more diverse audience and share a message of hope and salvation through our story.”

Audience response to screenings this summer backs Davis up:

Davis is an ordained minister who now puts his faith in action in the business world as owner of a digital marketing company. Seeing the need for a faith-based film about the search for identity, he began to develop the storyline.

In the film, Logan Chandler (John Major Davis) is a rising star in the world of mixed martial arts, but when his father, an MMA Champion, dies while training him, Logan leaves the ring unsure who he is anymore. He finds romance with a young woman of deep faith (Lelia Symington) and seeks to overcome a troubled past and establish a new life. His new faith is tested when a local MMA professional (Matt Leddo)—whose only losing fight was to Logan—forces him back into the cage.

“We fully expect some fans to see it just for the fight realism,” Davis said. “For authentic action, we’ve had viewers rank it far above a certain more well-known cage-fight movie.” In fact, while principal film shooting was in Tuscaloosa, the climactic fight scene was filmed at a professional MMA event in Mississippi.

“People don’t think about why they make the choices they make; we want them to leave the theaters asking what if: What if I did it God’s way?” Davis said.