HAYDEN CHRISTENSEN AND KATE BOSWORTH STAR IN A THRILLING AND POIGNANT TALE OF FAITH, PERSEVERANCE AND TRIUMPH BASED ON THE RUNAWAY BESTSELLER 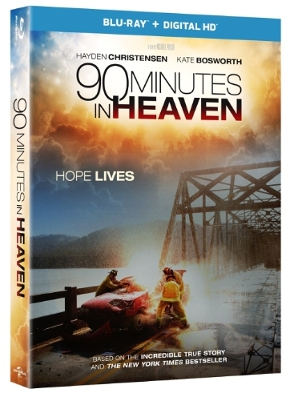 Universal City, California, October 14, 2015 – A powerful story of faith tested almost beyond human endurance, 90 Minutes in Heaven comes to Digital HD on November 17, 2015, and Blu-ray™ with DIGITAL HD, DVD and On Demand on December 1, 2015, from Universal Pictures Home Entertainment. Based on the true story that inspired a New York Times best-selling book, 90 Minutes in Heaven is a thrilling and touching account of a struggle for life that is nothing short of miraculous. Both the Blu-ray™ and DVD versions are filled with inspiring bonus features that take audiences behind the scenes of “an intimate story of survival and faith” (Movieguide®).

During the 90 minutes he is declared dead after a traffic accident, Don Piper experiences love, joy and life like he’s never known. But when he finally wakes in the hospital, Heaven’s bliss is replaced by excruciating pain and emotional turmoil. With the support of his family and community, Don clings to his faith and fights to recover the life he’s lost. Featuring Hayden Christensen and Kate Bosworth, 90 Minutes in Heaven is an emotional and inspiring story of perseverance that will bring hope and encouragement to all who see it.

Hayden Christensen (Star Wars: Episodes II and III, Shattered Glass) and Kate Bosworth (Still Alice, Blue Crush) carries a film that Movieguide.org calls “Powerful and inspiring!” and what critic Joe Leydon of Variety describes as, “…more bluntly realistic than many other faith-based dramas in its depiction of an ordeal that likely would challenge the faith of even the most devout Christians.” Available in time for the holiday season, 90 Minutes in Heaven is a gift of comfort, hope and encouragement for when we don’t have the right words to say.

Based on the Book By: Don Piper and Cecil Murphey