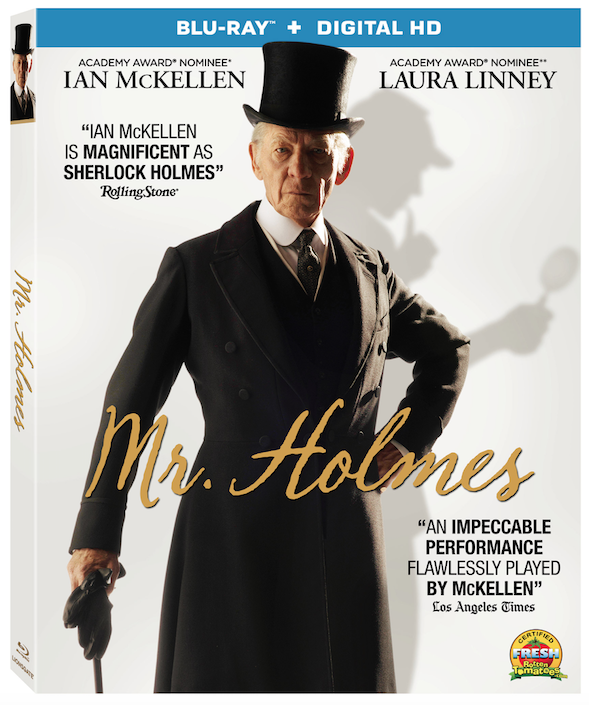 SANTA MONICA, CA (August 31, 2015) – Oscar® nominee Sir Ian McKellen* joins fellow Academy Award® nominee Laura Linney** in the mysterious and intriguing Mr. Holmes, arriving on Digital HD October 27 and Blu-ray™ (plus Digital HD), DVD (plus Digital), and On Demand November 10 from Lionsgate Home Entertainment and Miramax®. Based on Mitch Cullin’s novel “A Slight Trick of the Mind,” written for the screen by Jeffrey Hatcher (The Duchess), and directed by Academy Award® winner Bill Condon (Best Adapted Screenplay, Gods and Monsters, 1998), Mr. Holmes finds a retired Sherlock returning to close the book on the one mystery he could never solve. Winner of the Audience Award for Best Narrative Feature at the 2015 Sydney Film Festival and released theatrically in July by Miramax® and Roadside Attractions, the film is Rotten Tomatoes Certified Fresh.

See the world’s most famous detective as you’ve never seen him before, portrayed by acting legend Ian McKellen, in this ingeniously plotted suspense-thriller. For thirty years, Sherlock Holmes has been haunted by his final case, one that remains unsolved. Now, spurred by a mysterious trip to Japan, Holmes quietly slips out of retirement to confront the ghosts of his past-and a spellbinding mystery that will take all of his deductive powers to solve.

Filled with an “undercurrent of warmth and humanity” (BBC.com), the home entertainment release of Mr. Holmes includes two behind-the-scenes featurettes. Mr. Holmes will be available on Blu-ray and DVD for the suggested retail price of $24.99 and $19.98, respectively.

*Best Supporting Actor, The Lord of the Rings: The Fellowship of the Ring, 2001; Best Actor, Gods and Monsters, 1998

A FATHER’S LEGACY – in Theaters for One-Night Only

“THE SPONGEBOB MOVIE: SPONGE ON THE RUN” dives onto Blu-ray/DVD July 13th