“PATTERNS OF EVIDENCE: THE EXODUS”

RELEASES ON DVD AND BLU-RAY TODAY THROUGH CAPITOL CHRISTIAN DISTRIBUTION 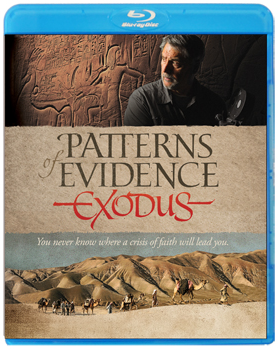 In “PATTERNS OF EVIDENCE: THE EXODUS” Filmmaker Timothy Mahoney chronicles an in-depth archaeological investigation in Egypt and Israel as his team attempts to corroborate the biblical text. The film explores one fundamental question: Is there any evidence that the Exodus story actually happened? Twelve years in the making, this provocative documentary reveals new or rarely seen evidence regarding the Israelites’ descent into slavery, their Exodus from Egypt and their ultimate conquest of the Promised Land. Although many scholars and archaeologists deny the validity of the Exodus story for lack of proof, “PATTERNS OF EVIDENCE: THE EXODUS” builds a case that sheds new light on the story.

“We are thrilled to partner with Thinking Man Films,” says Greg Bays, executive vice president for Capitol Christian Distribution. “With the movie’s previous success and the demand for the U.S. home entertainment release, we are confident that ‘PATTERNS OF EVIDENCE: THE EXODUS’ will have a tremendous impact and continue to spark conversations from people around the globe.”

Written, produced and directed by Mahoney along with Steven Law, Producers Peter Windahl and Diane Walker, and Executive Producer David Wessner, the DVD and Blu-ray editions highlight stunning animations and a cast including Narrator Kevin Sorbo (God’s Not Dead, Hercules: The Legendary Journeys), interviews with leading archaeologists such Israel Finkelstein, Kent Weeks, and David Rohl, and guest appearances by Israel’s Benjamin Netanyahu and Shimon Peres. Extras feature never-before-seen elements including exclusive interviews, “Behind the Music,” “From Film to Book” and information about additional books, resources and instructions on how to host a Patterns of Evidence movie event.

In conjunction with the home entertainment release, “PATTERNS OF EVIDENCE: THE EXODUS” will also offer the companion book and original motion picture soundtrack CD. The self-titled soundtrack has been arranged to follow the journey of discovery. The film score is the work of three talented composers – Jonathan David Neal, David Rohl, and Rob Barrett, Jr. Between them, they were able to create a unique soundtrack that captured the world of ancient Egypt and the Bible.

“PATTERNS OF EVIDENCE: THE EXODUS” (hardcover book) is written by Mahoney and Law and includes valuable insights and additional interviews not featured in the film. Filled with beautiful photography of Egypt and Israel, scenes from the biblical re-creations, maps, charts, and diagrams, it gives the reader an up-close and more in-depth look at the scholars and their positions.

In the U.S., the film received accolades at over a dozen film festivals and was presented as an exclusive Fathom event this past January (2015) at over 650 theatres nationwide. Generating positive critical and editorial response, the Fathom event had sold out performances with over 85,000 moviegoers attending the event, which included an encore performance. In addition, “PATTERNS OF EVIDENCE: THE EXODUS” garnered 13 film festival awards in 2014 including, Best Director (Worldfest Houston), Best Picture (ICVM), People’s Choice Award (Magnolia International Film Festival), and Best Cinematography, Best Sound, Best Editing (RealHeart International Film Festival, Toronto), among others.

For the latest news and updates regarding “PATTERNS OF EVIDENCE: THE EXODUS,” please visit:

“PATTERNS OF EVIDENCE: THE EXODUS” by Timothy P. Mahoney with Steven Law

Features: More than 170 color photos and 90 graphical images including the Wall of Time, charts, maps, and architectural re-creations

Thinking Man Films and its publishing division, Thinking Man Media, are focused on creative development, production and distribution of engaging products for cinema, television, web and print. Thinking Man Films desires to gain a better understanding of significant and complex topics by exploring the world with those who are curious.  The company is led by Timothy Mahoney.