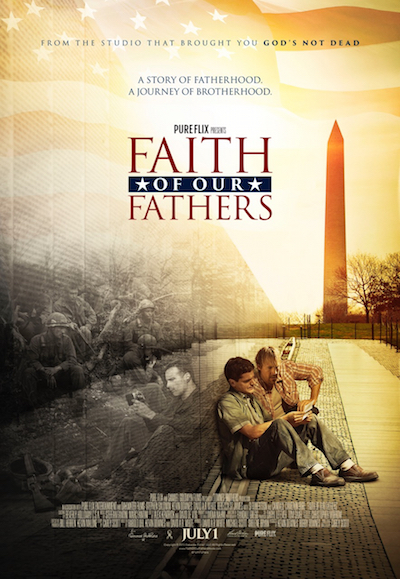 SCOTTSDALE, ARIZ. – April 7, 2015 – FAITH OF OUR FATHERS—a moving story of faith and friendship in time of war, and for generations—premieres nationwide July 1 as the nation commemorates the 50th anniversary of the Vietnam War.

“So many young men who went to Vietnam never came home,” said Si Robertson. “Hey,  they left families behind who never got to know those great guys. This story is about two sons on a road trip to learn about their dads. It’s a story about Vietnam, but it happens in all wars, and I’m proud to be part of a film that helps bring peace to people.”

SYNOPSIS
With the Vietnam War raging in 1969, two young fathers report for duty. A man of great faith and a doubtful cynic. A quarter-century later, their sons, Wayne and John Paul (David A.R. White and Kevin Downes), meet as strangers. Guided by letters handwritten from their fathers from the battlefield, they embark on an unforgettable journey to The Wall—the Vietnam Veterans Memorial in Washington, D.C. Along the way, they discover the devastation of war cannot break the love of a father for his son.

“FAITH OF OUR FATHERS is coming out at a strategically important time in American history as our nation is currently commemorating the 50th anniversary of the Vietnam War,” said Chaplain (Maj. Gen.) Doug Carver, USA-Retired, 22nd Army Chief of Chaplains (2007-2011).

Beginning July 1, stand up for faith, freedom and fatherhood as Pure Flix, the studio that created GOD’S NOT DEAD, presents FAITH OF OUR FATHERS. A story of fatherhood. A journey of brotherhood.

“FAITH OF OUR FATHERS honors all of those who served,” said Pure Flix Co-Founder and President Michael Scott. “Pure Flix is thrilled to partner with Downes Brothers and Samuel Goldwyn as we commemorate this important moment in our nation’s history.”

“Samuel Goldwyn Films is about unique voices bringing original stories to a wide audience,” said Meyer Gottlieb, president of Samuel Goldwyn. “In that spirit, FAITH OF OUR FATHERS is a fresh look at brotherhood forged in battle and love’s lasting power into future generations.”

FAITH OF OUR FATHERS reunites Stephen Baldwin (THE USUAL SUSPECTS) with the Downes Brothers (Baldwin previously starred in the Downes’ film SIX: THE MARK UNLEASHED), and marks Candace Cameron Bure’s (Full House) return to feature films. It also features  Grammy and Dove Award-winning Christian singer, author and actress Rebecca St. James. For David A.R. White (GOD’S NOT DEAD, THE VISITATION), a founder of Pure Flix, FAITH OF OUR FATHERS is the latest collaboration with the Downes Brothers. And Si Robertson brings his signature humor to his role as well as his personal experience as a Vietnam vet and man of faith.

Connect with FAITH OF OUR FATHERS:

Downes Brothers DownesBrothers.com
Bobby and Kevin Downes started making faith-based movies together in 1999, the vision of the Downes Brothers is to produce high-quality motion pictures to share strong messages of hope, faith and love that come through a personal relationship with God in Jesus Christ.

Pure Flix PureFlix.com
Pure Flix is a Christian movie studio that produces, distributes and acquires Christ-centered movies for the sole purpose of changing our culture for Christ, one heart at a time. Our mission, since day one, has remained the same, and we continue to strive to make a difference for His name.