“White Collar” The Con-plete Collection & The Complete Sixth Season Arrive on DVD May 5! 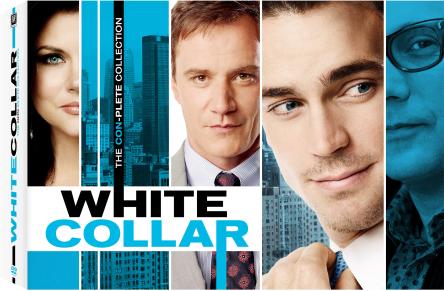 Catch all six seasons of one of the most seductive crime dramas to hit the small screen. In exchange for a reduced prison sentence, charming high-stakes thief Neal Caffrey (Golden Globe® Winner Matt Bomer*) forms an unlikely partnership with FBI Agent Peter Burke (Tim DeKay) to help catch other criminals. As Neal and Peter infiltrate deadly crime rings and face off against some of the world’s most dangerous masterminds, they also walk a thin line between trust and betrayal with each other. Also starring Tiffani Thiessen and Willie Garson, “White Collar” is a slick, witty, engaging series filled with plot twists and cliff-hangers – culminating in a finale that will leave you breathless!

Experience the thrills, one last time, with Season Six of television’s slickest, most seductive crime drama — “White Collar.” The tension has never been greater as Neal Caffrey (Matt Bomer) re-teams with FBI agent Peter Burke (Tim DeKay) in their most ambitious sting operation yet — infiltrating a sophisticated gang of deadly thieves. With Elizabeth Burke (Tiffani Thiessen) pregnant, Neal desperate for his freedom, and amidst pressure from Mozzie (Willie Garson) for Neal to cut ties with the FBI, the scheme unfolds, culminating in the series’ most shocking plot twist of all. Also, only on DVD, join the cast and crew as they discuss their favorite moments from the show’s six seasons in the moving retrospective “White Collar: Case Closed.”