FROM MARTHA WILLIAMSON THE EXECUTIVE PRODUCER OF

“TOUCHED BY AN ANGEL” 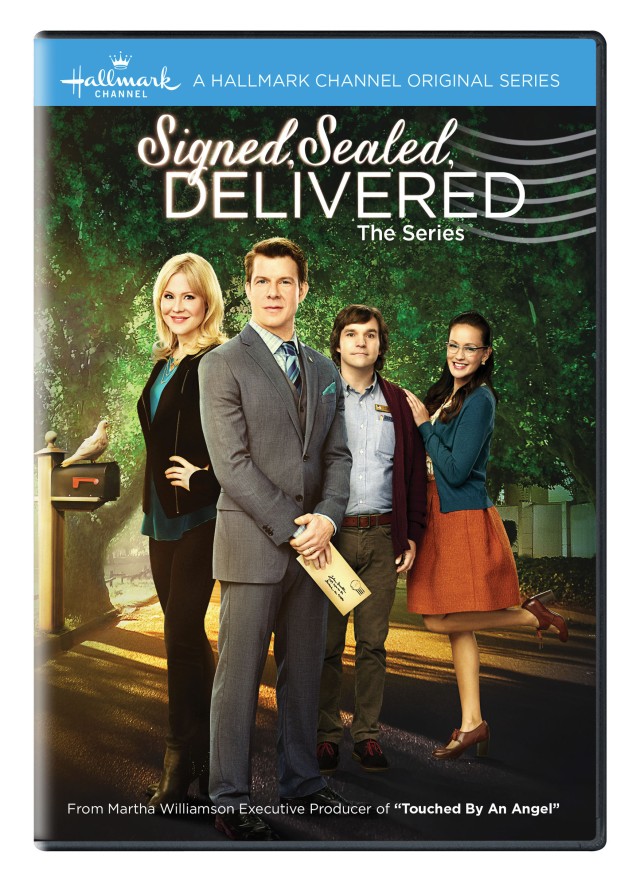 Signed, Sealed, Delivered: The Series is a wonderful combination of romance, comedy and drama for the whole family. The ten one-hour episodes follow four postal workers, the POstables, who transform themselves into an elite team of Dead Letter detectives to track down intended recipients of undeliverable mail. Their missions take them out of the office and into an unpredictable world where redirected letters and packages can save lives, solve crimes, reunite old loves and change futures by arriving late but somehow on time.

The team includes the group’s leader, charming Oliver O’Toole (Mabius), a man of faith who upholds traditional values in his life and work; Shane McInerney (Kristin Booth), a technophile who brings 21st century sensibility to the group; free-spirited, “girl next door” Rita Haywith (Crystal Lowe) who has a photographic memory; and lovable Norman Dorman (Geoff Gustafson), a master in conventional research methods. By the end, it becomes evident that the missions of the POstables aren’t just making an impact on the lives of others; they’re being changed, too.

Initially airing on the Hallmark Channel as an original movie, the season of “Signed, Sealed, Delivered” boosted the Hallmark Channel’s ranking as the #5 rated cable network on Sundays from 8-9 p.m. “Signed, Sealed, Delivered” is executive produced by Martha Williamson, best known as the executive producer of “Touched by an Angel” and beloved for her signature brand of family entertainment.

Cinedigm is a leading independent content distributor in the United States, with direct relationships with over 60,000 physical retail storefronts and digital platforms, including Wal-Mart, Target, iTunes, Netflix, and Amazon, as well as the national Video on Demand platform on cable television.  The company’s library of over 52,000 films and TV episodes encompasses award-winning documentaries from Docurama Films®, next-gen Indies from Flatiron Film Company®, acclaimed independent films and festival picks through partnerships with the Sundance Institute and Tribeca Films and a wide range of content from brand name suppliers, including National Geographic, Discovery, Scholastic, WWE, NFL, Shout Factory, Hallmark, Jim Henson and more.

Additionally, given Cinedigm’s infrastructure, technology, content and distribution expertise, the company has rapidly become a leader in the quickly evolving over-the-top digital network business.  Cinedigm’s first channel, DOCURAMA, launched in May 2014, and is currently available on over 165 million consumer devices including Roku, Xbox and Samsung, with additional platforms currently being rolled out.  Earlier this year, Cinedigm also announced plans for a Comic Con branded channel, in partnership with WIZARD WORLD, for launch in Q4 2014.  The Company recently announced its third OTT channel via a partnership with The Dove Foundation. DOVE MOVIE CHANNEL will be a digital streaming subscription service targeted to families and kids seeking high quality and family friendly content approved by Dove.