“PROVE HIM A THREAT TO ROMAN RULE,

AND I’LL SEE HIM CRUCIFIED.”

NATIONAL GEOGRAPHIC CHANNEL’S KILLING JESUS CHARTS THE INTENSE POLITICAL, SOCIAL AND HISTORICAL CONFLICTS THAT LED TO THE EXECUTION OF ONE OF HISTORY’S MOST WELL-KNOWN FIGURES

Three-Hour Television Event, Based on Best-Selling Book by Bill O’Reilly and Martin Dugard, and Produced by Scott Free Productions, to Premiere Globally on National Geographic Channel on Palm Sunday, March 29 at 8 PM ET/PT 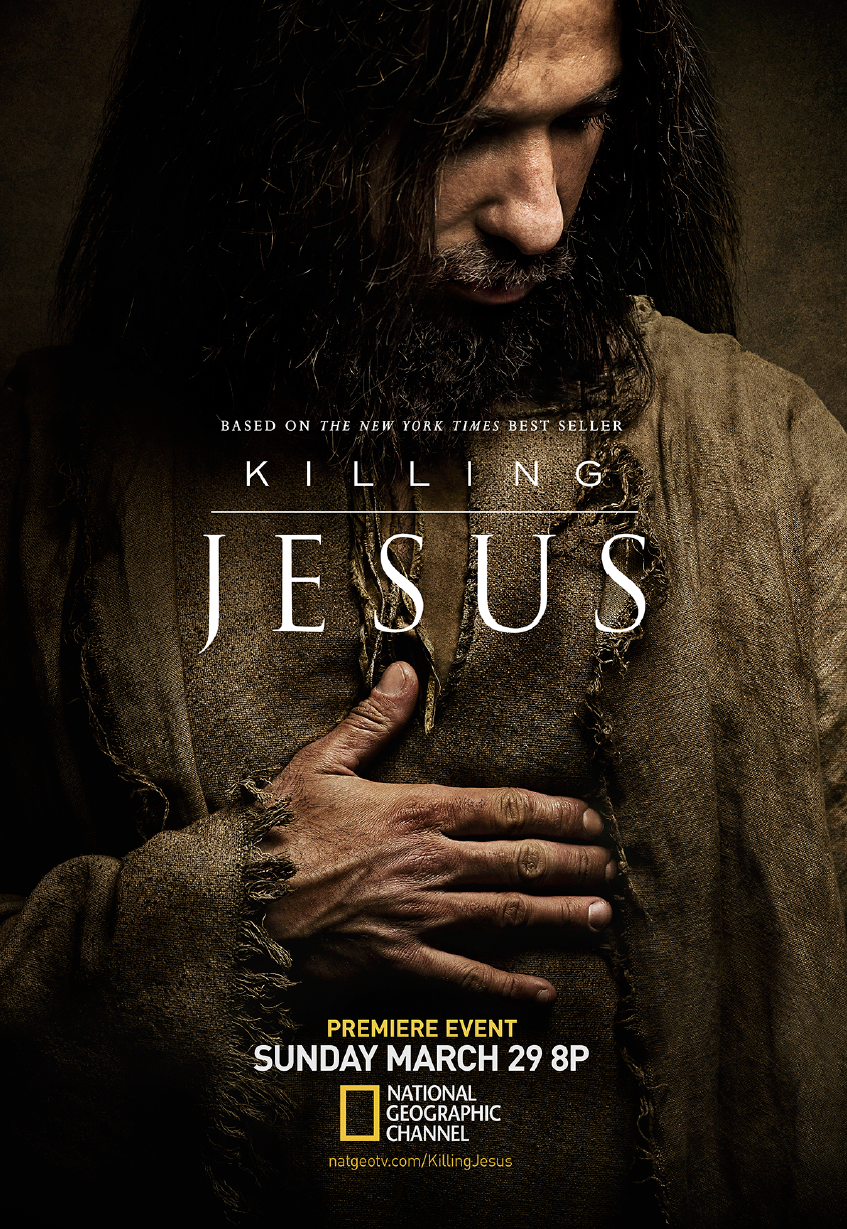 (Washington, D.C. – Feb. 18, 2015) It’s a story nearly the whole world knows, with more than 2.2 billion people around the globe following the teachings and principles of Jesus of Nazareth. But the intimate historical details of his life and the political collusions that led to his brutal demise bring intriguing context to the familiar story. This spring, National Geographic Channel’s KILLING JESUS, produced by Scott Free Productions and based on the New York Times best-selling book by Bill O’Reilly and Martin Dugard, dives deep inside the historical story of how Jesus’ message and preachings led to his persecution and execution by a group of conspirators who saw him as a threat to their power.

KILLING JESUS, a three-hour television event, will premiere on Palm Sunday, March 29, at 8 p.m. ET/PT on National Geographic Channel in the United States, globally in 171 countries in 45 languages and in Spanish on Nat Geo Mundo. The film is the third collaboration between NGC, Scott Free and Bill O’Reilly, whose first two projects together, Emmy-nominated Killing Kennedy and Killing Lincoln are respectively the two most-watched programs in the network’s history

Combining epic cinematography with intimate storytelling, KILLING JESUS was shot entirely in the Moroccan desert with a crew of 250 and more than 4,500 extras. The 93 speaking roles are brought to life by an incredibly diverse cast, with actors representing Lebanon, Morocco, Czech Republic, Ireland, Great Britain, Israel, Canada, Syria, Australia and the United States. The massive production, unlike anything undertaken by National Geographic Channel before, puts familiar Biblical characters under a new lens to give them layers of meaning rarely explored before.

Leading the cast are Kelsey Grammer (“Partners,” “Boss”) as King Herod the Great, the unrelenting and ambitious Roman-appointed King of Judea, who notoriously ordered the murder of all baby boys in Bethlehem, and Stephen Moyer (“True Blood”) as Pontius Pilate, the Roman governor who ordered Jesus’ crucifixion.

Haaz Sleiman (“The Visitor”) portrays the title character Jesus, with Rufus Sewell (“Hercules”) as Caiaphas, high priest of Jerusalem and conspirator in Jesus’s death; Emmanuelle Chriqui (“Entourage”) as Herodia, ex-wife of Herod II and wife of his brother Antipas, who manipulated her husband into having John the Baptist beheaded; Eoin Macken (“The Night Shift”) as Antipas, the tetrarch of Galilee and Perea; John Rhys Davies (“Indiana Jones”) as Annas, a high priest in Jerusalem who first questioned Jesus and his teachings; Abhin Galeya as John the Baptist, who was considered a prophet and arrested and killed by Antipas; and Stephanie Leonidas (“Defiance”) as Salome, daughter of Herod II and Herodias, whose dancing led to the demise of John the Baptist.

Rounding out the cast is Aneurin Barnard (“The White Queen”) as James, one of Jesus’ 12 apostles; Vernon Dobtcheff (“Before Sunset”) as Isaiah, the prophet whom King Herod claimed came to him in a dream and prophesied his death; Tamsin Egerton (“The Look of Love”) as Claudia, the wife of Pontius Pilate; John Lynch (“Sliding Doors”) as Nicodemus, a Pharisee and member of the high court in Israel, who was sympathetic to Jesus; Joe Doyle (“Reign”) as Judas, the apostle who eventually betrayed Jesus; Alexis Rodney (“Guardians of the Galaxy”) as Simon (Peter), the apostle who was Jesus’ closest confidant; and Chris Ryman (“28 Weeks Later”) as Malchus, a servant to Caiaphas.

With a script from Academy and Emmy Award-winning screenwriter Walon Green (“The Wild Bunch”), and directed by BAFTA Award-winner Chris Menaul (“The Passion of Ayn Rand,” “Fatherland”), KILLING JESUS brings a rich perspective to Jesus’ story that will intrigue believers and nonbelievers alike.

KILLING JESUS begins in the era of Jesus’ birth, with King Herod the Great ruling Judea, but feeling uneasy about potential threats to his power. This uneasiness leads Herod to order the murder of all boys under age 2, but a young Jesus and his family have already escaped. Moving 26 years into the future, we follow Jesus as he starts to develop and spread his message and begins to amass a following of devout believers. At the same time, new political players, including Herod’s son Antipas and Roman-appointed ruler Pontius Pilate, find themselves troubled by the growing influence of Jesus, while leaders in the Jewish Temple, Caiaphas and Annas, question his teachings and methods.

Through collusion, conspiracy and influence, Jesus is eventually arrested, in part due to the betrayal of one of his disciples, and crucified. He is buried in an unguarded tomb, and when mourners return several days later to anoint his body, the body is missing.

To this day, the body of Jesus of Nazareth has never been found.

Scott Free Productions was formed in 1995 and is the film and television production vehicle of acclaimed film directors, brothers Ridley and Tony Scott. Scott Free Television produces the Emmy- and Golden Globe-nominated, Peabody-acclaimed drama, “The Good Wife” for CBS, which is in production on its sixth season. Earlier this year, Scott Free produced “Klondike,” Discovery’s first scripted miniseries, and the Emmy-nominated Killing Kennedy for National Geographic Channel. Coming up, Scott Free is in prep on “The Man in the High Castle” for Amazon Studios; in post-production on “Halo: Nightfall,” a digital feature for Xbox Entertainment; and also in post-production on the sci-fi saga “Galyntine” for AMC. With offices in Los Angeles and London, Scott Free works closely with RSA Films, one of the largest and most successful commercial production houses in the world.