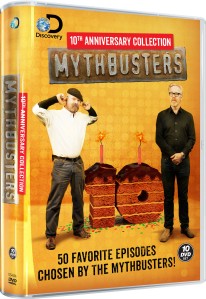 Honoring the landmark anniversary of Discovery Channel’s mega-hit series, the “MythBusters” 10th Anniversary Collection arrives January 13 from Cinedigm (NASDAQ: CIDM).  Relive some of the most unforgettable moments of the fan-favorite reality series with this 10-disc collection that includes 50 episodes selected by the popular “MythBusters” cast. Adam Savage, Jamie Hyneman, Grant Imahara, Kari Byron, and Tory Belleci will tackle more than 35 hours of debunking in this must-have anniversary collection.

Hosted by Adam and Jamie, along with Tory, Grant and Kari, “MythBusters” uses elements of the scientific method to test the validity of myths, tall tales and urban legends. The team’s combined backgrounds in animatronics, robotics, model building and prototyping arm them with the ability to create anything they need to test a myth, resulting in pulse-pounding explosions, thrilling crashes, hilarious mishaps and more.

Created by Peter Rees and produced by Beyond Television Productions, the “MythBusters” 10th Anniversary Collection DVD collection will be available for the suggested retail price of $99.99.

Synopsis
The mad scientists in the MythBusters lab have cooked up their biggest concoction yet: 50 full episodes packed with the craziest, coolest and most combustible conundrums that the scientific world has to offer. Adam, Jamie, Kari, Tory, and Grant will risk their limbs and eyebrows to stamp each myth with the official MythBusters seal. Serving up one huge heaping of your favorite explosive entertainment, this is one unforgettable anniversary celebration.