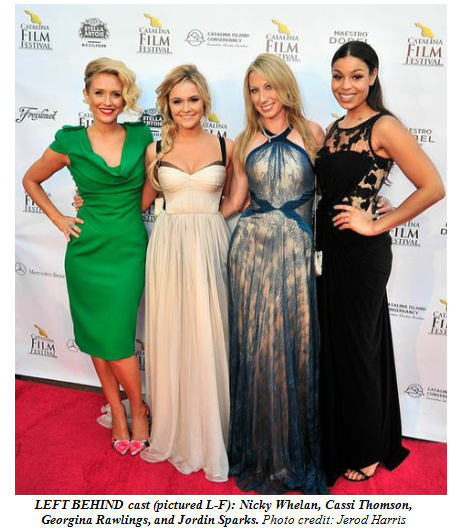 (LOS ANGELES, Calif.) September 29, 2014 – LEFT BEHIND star and Academy Award winner, Nicolas Cage received a distinguished honor during the 2014 Catalina Film Festival.  Cage was awarded the Charlie Chaplin ICON Award, which was presented prior to the special festival screening of LEFT BEHIND on Friday, September 26, 2014. The award is part of the 100 Year Celebration of Charlie Chaplin’s legendary career and advent of his iconic TRAMP character.  The award is presented annually to an actor or filmmaker whose work embodies Charles Spencer Chaplin’s qualities of realism, diversity and courage within his craft. Cage thanked the audience from the set in Toronto, where he is filming his next project and charmed the Catalina Film Festival goers with his heartfelt acceptance before introducing the highly anticipated LEFT BEHIND to the crowd.

The film made its premiere to audiences at the festival where several cast and crew attended the red carpet screening including actress and singer, Jordin Sparks who plays Shasta Carvell in the film and Cassi Thomson who plays the daughter of Cage as Chloe Steele.  Nicky Whelan, Alec Rayme, Georgina Rawlings, Co-Author of the “Left Behind” book series Jerry B. Jenkins, Randy LaHaye (grandson of co-author Tim LeHaye), Director Vic Armstrong and Producer Michael Walker also attended and walked the red carpet and participated in media interviews. Following the screening, the cast and crew participated in a Q and A for the audience and received overwhelming response.

LEFT BEHIND follows Rayford Steele (Nicolas Cage) who is piloting a commercial airliner during the Rapture when millions of people on the plane and around the globe suddenly vanish. Thirty thousand feet over the Atlantic, Rayford is faced with a damaged plane, terrified passengers, and a desperate desire to get back to his family. On the ground, his daughter, Chloe Steele (Cassi Thomson) is among those left behind, forced to navigate a world of madness as she searches for her lost mother and brother.

The movie is based on the New York Times best-selling book series of the same name, co-authored by Jerry B. Jenkins and Tim LaHaye.  Based on the Bible and published in 32 different languages, the series has sold more than 65 million copies and is one of the best-selling fiction series of all time.

Catalina Film Festival, an annual celebration of film on the only West Coast resort island, features more than 87 films, nightly events, and entertainment. Clear blue water and coastal breezes provide the perfect backdrop for unparalleled premieres, parties, industry networking, and discovering everything that the island has to offer. CFF’s beneficiary is the Catalina Island Conservatory. Visit www.CatalinaFilm.org