New Movie THE SONG Addresses Themes of Love, Sex and Meaning in Hollywood’s ‘Year of the Bible’

“A moving, entertaining ode to marriage, THE SONG is one of the best films of the year.”

“More heart and real-world value than either [Noah or Exodus]”

“I want to encourage you to grab your spouse and go see THE SONG. It is an incredible movie.

Korie and I watched it and we loved it. Do yourself a favor and go see it.” 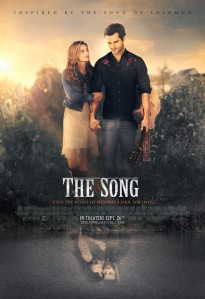 LOUISVILLE, KY — Before SHADES OF GRAY, “Dating Naked,” or even Harlequin romance novels, there was Song of Solomon, the “sexy” book of the Bible. From the best-selling book of all time, the racy Song of Solomon has inspired a new movie THE SONG opening nationwide this Friday.

Releasing nationwide on September 26th from Samuel Goldwyn Films and City on A Hill Studio, THE SONG takes an honest look into the life of a world-weary recording artist searching for meaning and love. Inspired by Song of Solomon (known for its poetic language about love and lovers), THE SONG features 11 original songs with an American Roots flavor.

The film has been screened for more than 10,000 pastors and church leaders over the course of the summer. Additionally, an extensive line of curriculum resources are available to further the experience and become a catalyst for strengthening marriage. Executive Producer of THE SONG and Teaching Pastor of America’s fourth largest church, Southeast Christian Church in Louisville, KY, Kyle Idleman hopes the film will generate honest conversations about topics often avoided in ministry settings.

“I think the church often hides under the covers, so to speak, when it comes to the issues of love, sex and marriage, and by doing so popular culture continues to shape how we think about these subjects. It seems like it might be good for [the church] to step back and ask the question, ‘How’s that workin’ out for us?'” says Idleman.

THE SONG follows aspiring singer-songwriter Jed King (Alan Powell) as he struggles to catch a break and escape the long shadow of his father, a country music legend. After reluctantly accepting a gig at a local vineyard harvest festival, Jed is love-struck by the vineyard owner’s daughter, Rose (Ali Faulkner), and a romance quickly blooms. Soon after their wedding, Jed writes Rose “The Song,” which becomes a breakout hit. Thrust into a life of stardom and a world of temptation in the form of fellow performer Shelby Bale (Caitlin Nicol-Thomas), Jed’s life and marriage begin to fall apart.

Woven throughout the story is voice-over narration taken from verses in Song of Solomon, Ecclesiastes and Proverbs; metaphorically, the film draws on the life and writings of King Solomon, thought to be one of the wisest men in history, and known for his book on love and intimacy. However, with its entertaining blend of music, romance and heartbreak, THE SONG plays to wider audiences and is reminiscent of films like WALK THE LINE, COUNTRY STRONG, and CRAZY HEART.

“THE SONG has the potential to resonate with anyone, regardless of their beliefs or background. I think movie-goers will appreciate this film as a stand-alone music-driven drama that plays as a cautionary love story and not a cinematic sermon,” says writer and director Richard Ramsey.

What others are saying:

“THE SONG has a great message on priorities, communication, faith and redemption.” — Jeff Foxworthy
“THE SONG’s music will stick with you, as will the message. Go see this important film.” — John Howard, Duck Commander
“A real interpretation of life on the road, and a STAR performance from Alan Powell – THE SONG is not your glossy Christian movie.” — Chuck Howard, Multi-platinum, award-winning music producer/songwriter who created hits for country stars LeAnn Rimes, Trick Pony, and others
“This is not a typical Christian film. It is a raw portrayal of tragic choices while at the same time offering hope of redemption.” –Michael Catt, Pastor, Sherwood Baptist Church