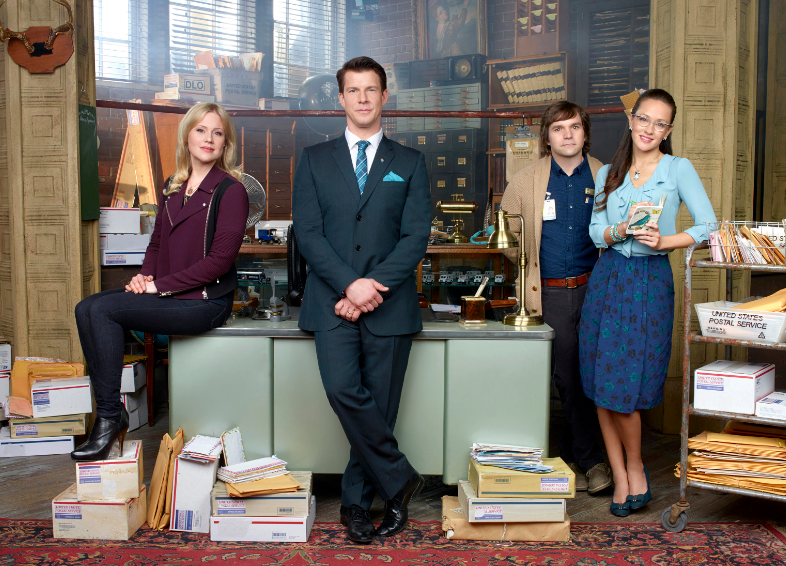 “We are making history at Hallmark Channel by joining forces with Martha Williamson, one of TV’s great storytellers, as she returns to television making the kind of series we know tens of millions of viewers are yearning for,” said Michelle Vicary, executive vice president, programming, Hallmark Channel and Hallmark Movie Channel. “This marks a significant milestone in our growth into scripted programming, and we couldn’t be happier to have the opportunity to work with the very gifted and talented Martha Williamson, who brings her trusted name in family entertainment to our network.”

“As much as the television landscape has changed, the audience for positive and inspiring programming hasn’t gone anywhere,” says Williamson. “It is a privilege to work with Michelle and the great team at Hallmark Channel on a series that I know will bring viewers inspiration and hope.”

Hallmark Channel’s new original series is a wonderful combination of romance, comedy and drama that follows the lives of four postal workers who transform themselves into an untraditional team of detectives to track down intended recipients of undeliverable mail. Their missions take them out of the office into an unpredictable world where letters from the past can change lives when they arrive late but somehow on time.

Williamson made television history when her CBS series “Touched By An Angel” set a new standard for an inspirational family drama when it grew to a weekly audience of 25 million viewers during its initial nine year run. As executive producer of the ground-breaking series, she was the visionary who guided the series into previously uncharted territory with her unique brand of storytelling that produced more than strong ratings; it changed lives. Williamson went on to seal her place in history when she became the first woman to solely executive produce two one hours simultaneously with “Promised Land,” which aired for three years on CBS. Her work has been inducted into the Television and Radio Hall of Fame and honored with numerous awards, including the Edward R. Murray Responsibility in Television Award, the Templeton Prize Epiphany Award and nine Emmy® nominations.

Hallmark Channel, owned and operated by Crown Media Holdings, Inc., is a 24-hour basic cable network that provides a diverse slate of high-quality entertainment programming available in high definition (HD) and standard definition (SD) to a national audience of 86 million subscribers. Hallmark Channel is the nation’s leading destination for quality family programming with an ambitious slate of TV movies; original scripted series, including Cedar Cove and When Calls the Heart; specials such as Kitten Bowl; as well as some of television’s most beloved sitcoms and series, including The Golden Girls, The Waltons, Little House on the Prairie, and Frasier. The channel is also home to Daytime Emmy-nominated lifestyle program, Home & Family, a daily two-hour live show shot in a fully functional house located on the Universal Studios lot. Hallmark Channel’s sibling network, Hallmark Movie Channel, available in HD and SD, focuses on family-friendly movies with a mix of original films, classic theatrical releases, and presentations from the acclaimed Hallmark Hall of Fame library.

Muse Entertainment is a leading film and television production company known for its well-crafted and high-quality productions. Since its founding in 1998, Muse has produced, co-produced or provided production services on more than 170 TV movies and mini-series, television series and feature films and has won over 100 awards and garnered over 300 award nominations! Muse Entertainment’s most recent television series are Played, Bomb Girls (Seasons I, II), Bounty Hunters and Being Human (Seasons 1, II, III, IV). In 2011, its topical, 8-hr. historical drama, The Kennedys, earned 10 Emmy Award nominations. Its Pillars of the Earth also won an Emmy and many other awards. Muse’s other award-winning programs are Cyberbully, Durham County (Seasons I, II, III), Ben Hur, The Last Templar, Impact, Human Trafficking, Answered by Fire, This is Wonderland and Tales from the NeverendingStory. The company’s head office and its Quebec production centre are in Montreal. Muse also maintains development and production operations in Toronto, Vancouver and Los Angeles. For more information please visit www.muse.ca