A Fun-Filled, Food-Fight Adventure for the Whole Family

CLOUDY WITH A CHANCE OF MEATBALLS 2 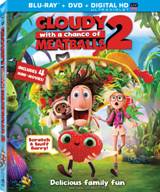 CULVER CITY, CALIF. (Nov. 27, 2013) – Flint Lockwood (Bill Hader) and the Swallow Falls gang are back with another helping of adventure in Sony Pictures Animation’s CLOUDY WITH A CHANCE OF MEATBALLS 2, available Jan. 28 on Blu-ray 3D Combo Pack, Blu-ray™ Combo Pack and DVD* from Sony Pictures Home Entertainment. Inventor Flint Lockwood thought he saved the world when he destroyed his most infamous invention — a machine that turned water into food, causing edible weather like cheeseburger rain and spaghetti tornadoes. However, he soon learns that his invention survived and is now creating food-animals,
or “foodimals!”  Now, Flint and his friends must embark on a dangerously delicious mission to battle hungry tacodiles, shrimpanzees, hippotatomuses, cheespiders and other foodimals to save the world once more.

Fans hungry for more can indulge in a host of bonus materials on the CLOUDY WITH A CHANCE OF MEATBALLS 2 3D Blu-ray and Blu-ray Combo Packs, including four mini-movies directed by animation veteran David Feiss. The first all-new mini-movie, “Attack of the 50-Foot Gummi Bear,” finds Steve chasing a mischievous gummi that misused one of Flint’s inventions to grow into a 50-foot beast. In the second never-before-seen mini-movie, “Steve’s First Bath,” Flint must quickly alter his plans for a romantic date with Sam after his monkey-cleaning invention goes awry. Both Combo Packs come with two additional previously released mini-movies, “Super Manny” and “Earl Scouts,” along with strawberry-scented scratch ‘n sniff packaging. The Combo Packs and DVD are also stuffed with filmmaker commentary, deleted scenes and seven behind-the-scenes featurettes, including candid interviews with the animators and voice talent, and a look at the stunning end credits and all-new, making-of-the-music video from fan-favorite Cody Simpson.

The film is directed by Cody Cameron and Kris Pearn, and was written by Phil Lord, Christopher Miller and Erica Rivinoja. The screenplay is by Erica Rivinoja, John Francis Daley and Jonathan Goldstein, inspired by the book Cloudy with a Chance of Meatballs written by Judi Barrett and illustrated by Ron Barrett.  The film is produced by Pam Marsden and Kirk Bodyfelt, and executive produced by Phil Lord and Christopher Miller.  Music in the film is by Mark Mothersbaugh, with imagery and animation by Sony Pictures Imageworks, Inc.

Inventor Flint Lockwood thought he had saved the world when he destroyed his most infamous invention — a machine that turned water into food, resulting in cheeseburger rain and spaghetti tornadoes. But Flint soon learns that his invention survived and it is now combining food and animals to create “foodimals!” Flint and his friends embark on an adventurously mouth-watering mission to battle hungry tacodiles, shrimpanzees, hippotatomuses, cheesepiders and other foodimals to save the world – again!

CLOUDY WITH A CHANCE OF MEATBALLS 2  has a running time of approximately 95 minutes and  is rated PG for mild rude humor.

Visit Sony Home Entertainment on the Web at www.SonyPictures.com.

Sony Pictures Animation produces a variety of animated and family entertainment for audiences around the world.  The studio is following its worldwide comedy hits—the 2012 monster hit comedy Hotel Transylvania, the hybrid live action/animated blockbusters The Smurfs and The Smurfs 2, and the 2009 mouth-watering Cloudy with a Chance of Meatballs—with the family comedy Cloudy With A Chance of Meatballs 2 in theaters now.  Sony Pictures Animation also released a brand new mini-movie on DVD and television this Fall, The Smurfs: The Legend of Smurfy Hollow.  The studio, in conjunction with Aardman Animations, has produced two critically acclaimed feature films:  the CG-animated family comedy Arthur Christmas; and the Academy Award® nominated stop-frame animated high-seas adventure, The Pirates! Band of Misfits.  In 2007, Surf’s Up also received an Academy Award® nomination for Best Animated Feature Film.  The division, whose first feature film Open Season led to a very successful movie franchise, turned 10 in 2012.  Sony Pictures Animation is an operating unit of Sony Pictures Digital Productions