Joss Whedon’s Contemporary Spin On A Classic Tale Much Ado About Nothing Arrives On Blu-ray, DVD and Digital Download October 8 From Lionsgate 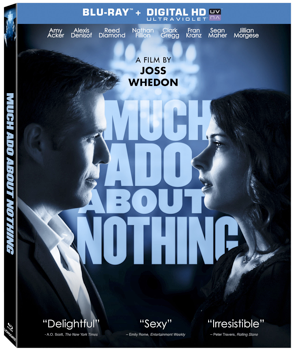 From acclaimed director Joss Whedon comes a “truly delightful, charming, sexy” (BlackBook) and modern retelling of Shakespeare’s timeless tale, Much Ado About Nothing, arriving on Blu-ray Disc (plus Digital HD UltraViolet), DVD (plus Digital UltraViolet) and Digital Download on October 8 from Lionsgate Home Entertainment. Much Ado About Nothing will also be available two weeks prior to the Blu-ray and DVD release with a September 24 Video on Demand premiere date.The film features an all-star cast from many of Whedon’s cult favorite projects including Amy Acker (The Cabin in the Woods, TV’s “Angel”), Alexis Denisof (TV’s “Angel,” TV’s “How I Met Your Mother”), Reed Diamond (Moneyball, TV’s “Franklin & Bash”), Nathan Fillion (TV’s “Castle,” TV’s “Firefly”), Clark Gregg (The Avengers) and Fran Kranz (The Cabin in the Woods).

Much Ado About Nothing is a contemporary spin on Shakespeare’s classic comedy about sparring lovers Beatrice and Benedick – offering a sensual, tragic and occasionally absurd view of the intricate game that is love.

Rating: PG-13 for some sexuality and brief drug use