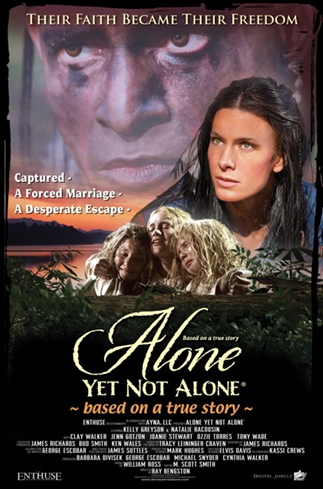 A stirring film with an inspirational soundtrack and captivating cinematography, Alone Yet Not Alone is based on a true story taken from the novel of the same name written by Tracy Leininger Craven and depicts a family at a critical juncture in America’s history.

Alone Yet Not Alone tells the inspiring story of Barbara and Regina Leininger and their journey of faith and survival during the French & Indian war in 1755. Captured by the Delaware Indians in a raid on their home and transported over 300 miles of wilderness to Ohio, the sisters are sustained only by their abiding trust in God, and their hope of escape against all odds to be reunited with their family.

“Enthuse Entertainment is pleased to present Alone Yet Not Alone as our flagship movie,” says Director Ray Bengston. “Based on a true story, this film is a journey of faith and survival during one of the most trying times in the infancy of American history. The unmistakable message that ‘God will never leave nor forsake you’ will captivate audiences and resonate feelings of hope for the characters in a seemingly hopeless situation.”

Alone Yet Not Alone is produced by Barbara Divisek and features a strong crew that also includes Music Composer William Ross (The Tale of Despereaux, A Very Harold & Kumar 3D Christmas, Ladder 49 and Tuck Everlasting), and Film Editor M. Scott Smith  (Flashdance, The Karate Kid, Some Kind of Wonderful, Johnny Be Good and The Game of Their Lives).

A movie filled with action, drama and suspense, Alone Yet Not Alone was filmed on location at historical sites in Tennessee, Virginia, Pennsylvania and North Carolina to allow audiences to take the journey with the characters.   Filmmakers realized that in order to tell the story authentically, they would need to shoot where the events actually happened or those similar in terrain. Bengston says the location “gave us the scope the movie deserves. The rivers, mountains, lush forests, and incredible waterfalls.”

The film is currently backed by a diverse marketing campaign which includes comprehensive social media and publicity efforts that reach into multiple genres including faith & family, general market and churches, among others.  There will be an aggressive national advertising campaign to support the release, as well as nationwide screenings, partnerships with key Christian ministries, merchandising materials and special educational materials created aimed at churches and schools.

Enthuse has chosen to release Alone Yet Not Alone through a new movie ticket reservation platform and film distribution company called Seatzy™  (www.seatzy.com/alone).  Seatzy allows moviegoers to participate in the process of supporting the films they love by getting ticket reservations in early and assuring the film will play in the theater closest to them.

Opening theaters will be announced at a later date.

Enthuse Entertainment is committed to the creation of entertainment that inspires audiences through the transformative power of uplifting and affirming films. Producing faith-based movies that demonstrate Christian principles and the power of God’s redemptive love, Alone Yet Not Alone serves as the company’s premier release. For more information, please visit www.enthuseentertainment.com.