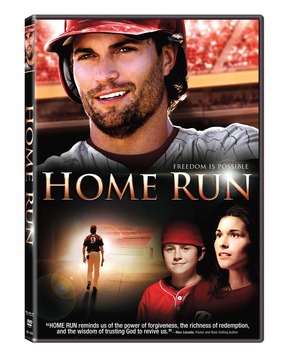 Nashville, Tenn. (July 23, 2013) – After celebrating an impactful theatrical run and embracing the stories of change heard nationwide, HOME RUN is set to continue sharing the message that “freedom is possible” with its release to DVD and Blu-ray today, July 23. The Millennium Entertainment and Provident Films DVD and Blu-ray release will be available initially only at Walmart and Christian retail stores while site licenses for screenings of HOME RUN at churches and non-profit organizations are currently on sale. The film will also be available for digital download and VOD on August 27.

Declared as a film that “reminds us of the power of forgiveness, the richness of redemption, and the wisdom of trusting God to revive us” by Max Lucado, New York Times best-selling author and pastor, the impact of HOME RUN has fostered grassroots support from churches, Celebrate Recovery groups, Christian leaders and more across the country. Audiences of HOME RUN have taken to discussions forums and the official HOME RUN Facebook Page to share their stories of hope and recovery. Here is a sampling of the moving impact taking place:

“My 22-year-old song Logan is a drug addict and was injured in a wreck that almost took his life. My daughter took him to see HOME RUN. She said he cried through the whole movie. It really made me feel good to see him connect with this film.” – Sheryl

“A man in our Celebrate Recovery group had been frustrated with trying to find a job, and decided to go to the movies. HOME RUN was the next movie to start, so he bought a ticket. Thanks to the impact of the film, he is now on his way back to faith in Christ after a long wilderness wandering.” – Kendall

“I’ve seen HOME RUN four times in three weeks, and I’ve brought over 10 different guys with me each time, all of which struggle with addictions. This movie is making an impact in our community!” – Jason

Special features on the HOME RUN DVD & Blu-ray include: