THE EXTRAORDINARY ADVENTURES OF ADÈLE BLANC-SEC 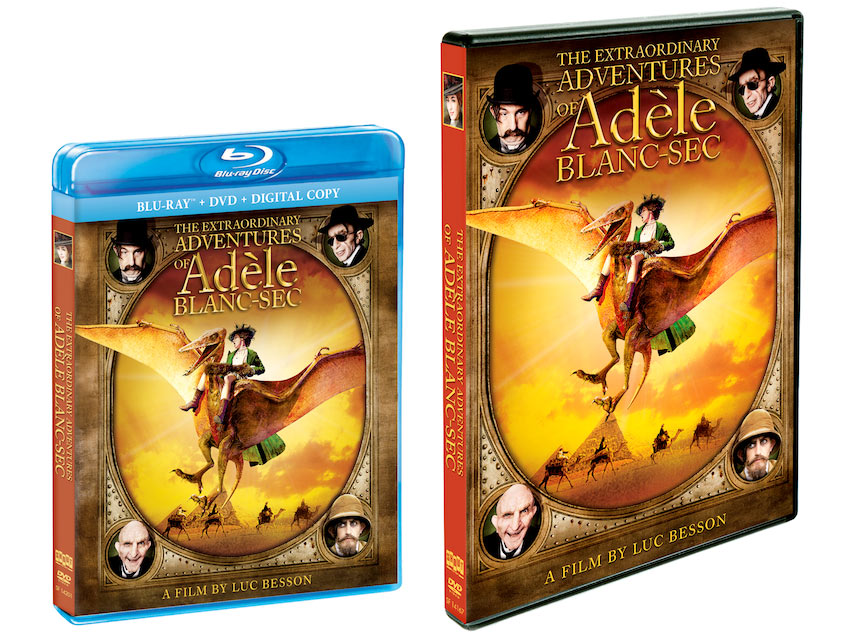 This summer, let your imagination run free. Journey into an awe-inspiring world of action fantasy and visual wonder with popular French comics heroine Adèle Blanc-Sec as she leaps from the pages to the screen! On August 13, 2013, Shout! Factory, in collaboration with EuropaCorp, invite families and the young-at-heart across America to be captivated by one of the most highly anticipated international motion pictures of all time when Luc Besson’s THE EXTRAORDINARY ADVENTURES OF ADÈLE BLANC-SEC unleashes on DVD and on two-disc BLU-RAY COMBO PACK. The Blu-ray combo pack allows viewers to enjoy THE EXTRAORDINARY ADVENTURES OF ADÈLE BLANC-SEC on the platform of their choice and includes spectacular movie presentation on Blu-ray, DVD and a digital copy of the movie compatible with PC, MAC, iTunes, iPhone and AppleTV.

Brimming with heart-pounding action, breathtaking cinematography and visceral special effects, this acclaimed feature illustrates the magical power of moviemaking, and delivers wildly entertaining cinematic adventure filled with humor, incredible action, mystery and lush Parisian period details that the whole family will enjoy! Both Blu-ray combo pack and DVD editions offer English and French audio tracks, English subtitles. Insightful bonus features take viewers behind- the-scenes as director Luc Besson and the cast share their passion in bringing this timeless tale to the screen. Available in stores nationwide, THE EXTRAORDINARY ADVENTURES OF ADÈLE BLANC-SEC Blu-ray combo pack is priced to own with a suggested retail price of $24.97, and $14.97 for the DVD. THE EXTRAORDINARY ADVENTURES OF ADÈLE BLANC-SEC The Director’s Cut Edition Two-Disc Blu-ray+DVD Combo Pack will arrive in stores this Fall 2013.

Pre-order is available today on Amazon and ShoutFactory.com before the DVD and the two-disc Blu-ray Combo Pack arrive in stores nationwide on August 13, 2013

The year is 1912. This is the story of an intrepid young reporter Adèle Blanc-Sec and her quest for the power of life over death. Her journey would take her to distant lands to face many dangers beneath the sands. She will go to any lengths to achieve her aims, including sailing to Egypt to tackle mummies of all shapes and sizes. Meanwhile in Paris, a 136 million-year old pterodactyl egg on display in the natural history museum has mysteriously hatched, and the creature subjects the city to a reign of terror from the skies. But nothing fazes Adele Blanc-Sec, whose adventures include many more extraordinary surprises…

Movie presentation on Blu-ray, DVD and a Digital Copy of the film

EuropaCorp ranks amongst the top European film studios. Founded in 1999, EuropaCorp’s different activities include production, theater distribution, home entertainment, VOD, sales of TV rights for France as well as sales of international rights, partnerships and licenses, original soundtrack production and publishing. The Group has also been producing TV drama since 2010. EuropaCorp’s integrated financial model generates revenues from a wide range of sources. With films from a wide range of genres and a strong presence in the international market, the Group has produced some of the latest French worldwide record-breaking successes. EuropaCorp’s catalogue includes 500 films and the company employs 120 permanent staff members.