PARAMOUNT HOME MEDIA DISTRIBUTION CELEBRATES THE DANNY KAYE CENTENNIAL WITH THE PREMIERE OF THE FIVE PENNIES, ON THE DOUBLE, THE COURT JESTER AND KNOCK ON WOOD NOW AVAILABLE ON ITUNES 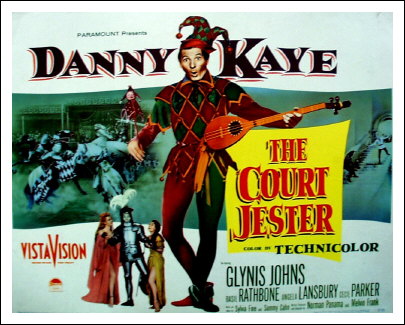 HOLLYWOOD, CA – Paramount Home Media Distribution (PHMD) announced today that four beloved films starring the incomparable Danny Kaye are available on iTunes for the first time ever in celebration of The Danny Kaye Centennial.  Fans can now download the Oscar-nominated biopic The Five Pennies (1959), the musical comedy On the Double (1961), the period comedy The Court Jester (1955) and the hilarious caper Knock on Wood (1954), all quintessential family-friendly films that everyone can enjoy for Father’s Day. This year marks the 60th anniversary for Kaye as a UNICEF ambassador as well as the 60th anniversary of both the Knock on Wood and White Christmas releases.

In The Five Pennies Kaye cuts loose with his trademark dramatic and comedic talents in this success-tempered-with-tears biopic of jazz great Red Nichols, which features legendary performances by Louis Armstrong, along with big band icons Bob Crosby, Ray Anthony and Shelly Manne.  In On the Double Kaye stars as Ernie Williams, a G.I. with weak eyes, a weak stomach and weak nerves but an uncanny resemblance to British Colonel MacKenzie.  Williams is asked to impersonate the Colonel, allowing him to make a secret trip East – but what Williams is not told is that the Colonel has recently been a target of Nazi assassins.  The Court Jester showcases Kaye’s variety of talents as he plays kind-hearted entertainer Hawkins who disguises himself as the legendary king of jesters, Giacomo. Hawkins infiltrates the court of the evil villain Basil Rathbone, but when a sorceress hypnotizes him, royal chaos ensues.  In Knock on Wood Kaye is a ventriloquist who becomes the target of a spy ring when secret plans are hidden in his dummies’ heads.

The Danny Kaye Centennial, which began in late 2012 and continues into early 2014, is a celebration of events and activities honoring a legendary entertainer and trail blazing humanitarian’s amazing contributions to the arts.  The event highlights this uniquely talented man who brought laughter and joy to generations and served as UNICEF’S first Goodwill Ambassador.  Kaye received countless accolades during his lifetime including Oscars®, Emmys®, Golden Globes®, The French Legion of Honor, The Kennedy Center Honors and the Presidential Medal of Freedom. Beginning in October of 2012 events around the country invited the public to experience the talents that made Danny Kaye one of a kind. These included programs with UNICEF, the Academy of Motion Picture Arts and Sciences (AMPAS), Jazz at Lincoln Center, the Library of Congress, the Paley Center for Media, Sirius XM Radio, Museum of the Moving Image and The New York Pops.  The Danny Kaye Centennial will culminate with UNICEF presenting the Danny Kaye Humanitarian Award in January 2014.