Up, up and a long way from home… 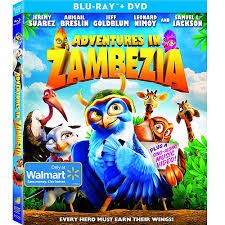 Featuring Kid-Friendly Extras, Including a Music Video and Four Featurettes

The Blu-ray ™ + DVD Combo Pack and DVD boast kid-friendly extras, including the music video “Come Fly with Me” by Jewels Jaselle and Benj Heard, as well as four featurettes. “Birds of a Feature” looks at the different birds from South Africa who inspired the film, as well as the actors who voiced the characters.  “An African Story” ” takes a look at the story and scriptwriting process behind the film. “The Tree City” explores what it took to create and animate Zambezia. Finally, “Technical Challenges” lets viewers discover some of the challenges of making an animated film, including designing all of the birds’ feathers.

Executive Producers include Mace Neufeld who has produced blockbusters such as The Sum of All Fears and the Academy Award® nominated Invictus; Edward Noeltner, co-executive producer of the popular animated series and internet phenomenon Happy Tree Friends; and associate producer Ned Lott (The Chronicles of Narnia: The Lion, the Witch and the Wardrobe) who was also the casting and voice director for ADVENTURES IN ZAMBEZIA.

When a spirited young falcon named Kai (Jeremy Suarez, TV’s “The Bernie Mac Show”) learns of Zambezia, the fabulous city of birds, he leaves his remote country home against the wishes of his father (Jackson). But when his dad is captured by an evil lizard who plans to attack the city, Kai must learn the importance of teamwork if he’s to rescue his father, save his new friends and help keep Zambezia lizard free. Samuel L. Jackson, Abigail Breslin, Jeff Goldblum and Leonard Nimoy give voice to this beautifully animated fun-filled adventure the whole family will enjoy!

ADVENTURES IN ZAMBEZIA has a run time of approximately 82 minutes and is rated G.