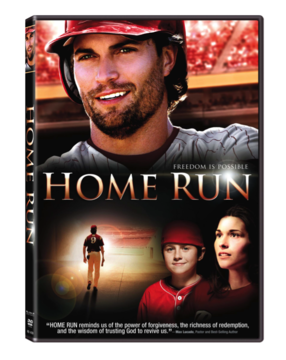 Nashville, Tenn. (May 21, 2013) – HOME RUN has a lot to be proud of after its nationwide theatrical release last month. The Samuel Goldwyn Films release, in association with Provident Films, opened in almost 400 theaters in North America and debuted as the No. 2 new film of the week, second only to Tom Cruise’s Oblivion. The opening weekend success led to an expansion into 70 new theaters in the United States and Canada. Today, Provident Films and Millennium Entertainment announce that HOME RUN will release to DVD and Blu-ray on July 23, giving many others the chance to hear and share the film’s message that “freedom is possible.” DVD and Blu-ray copies will be available initially only at Walmart and Christian retail stores. Site licenses for screenings of HOME RUN at churches and non-profit organizations go on sale today with showings starting July 5.

“Lives have been changed due to the message of this film and its North American theatrical release,” says executive producer Carol Mathews. “Now with its availability on DVD and Blu-ray, I am encouraged and excited that even more people will have the opportunity to watch it and know that freedom is possible.”

To view a trailer of HOME RUN, click here.

HOME RUN accumulated an impressive collection of praise and reviews for the theatrical release. Here’s a snapshot of the acclaim garnered nationwide for the film:

“The movie HOME RUN is great for not only baseball fans, but anyone looking to be inspired. The story provides an important reminder that no matter how successful we are, we are all affected by the issues that come along. Only through Jesus we can find the peace and comfort to live this life.”

“HOME RUN swings for the fences, and often connects.”

“HOME RUN reminds us of the power of forgiveness, the richness of redemption, and the wisdom of trusting God to revive us.”

“HOME RUN is a must-see story of change and redemption—a story all of us need to hear and know. Freedom is possible with God in our lives!”

“Cory’s story invites all of us to consider how our own bad habits and selfishness might be influencing those closest to us (and) to remember how fantastic and inspiring is God’s grace.”

– Focus on the Family’s Plugged-In

Special features on the HOME RUN DVD & Blu-ray include: