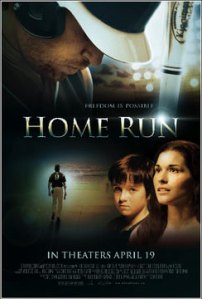 Nashville, Tenn. (May 7, 2013) – After a successful opening weekend, HOME RUN continues to celebrate a fantastic start for David Boyd’s (The Walking Dead, Friday Night Lights) feature film. After opening in some 400 theaters across the country and debuting at No. 2 after Tom Cruise’s Oblivion, the Samuel Goldwyn Films release, in association with Provident Films, astounded audiences and critics alike with its honest portrayal of overcoming life’s difficulties. Starting this weekend, the film will open in 70 new theaters nationwide, giving more moviegoers a chance to hear the message that with God, it’s never too late … freedom is possible. For more information on theaters showing the film, please visit www.homerunthemovie.com.

“It has been incredible to see what has unfolded over the past few weeks since HOME RUN hit the theaters,” remarked the film’s Executive Producer Carol Mathews.  “While it’s been exciting to get good reviews in the press and now see the film expand in to more markets, the best thing has been the lives we are seeing changed by the message of this film. It is truly giving people hope that ‘freedom is possible’ in their own lives and in their own situations – and that is beyond what I could have ever hoped for.”

Home Run has a 100% user rating on Rotten Tomatoes and has reported, via Facebook posts, the common occurrence of erupting applause and standing ovations in multiple theaters after credits begin to roll.  Celebrate Recovery, the featured 12-step program portrayed in the film, has reported a substantial up-tick of newcomers in chapters across the country since the movie released on April 19.

Samuel Goldwyn Films in association with Provident Films have partnered in the marketing and distribution of HOME RUN. Past successes of the Goldwyn and Provident partnership include Fireproof, October Baby and Facing the Giants. A Hero Productions Film in association with Impact Productions, HOME RUN is directed by David Boyd, with a screenplay by Brian Brightly, Melanie Wistar, Eric Newman and Candace Lee. The film is executive produced by Carol Spann Mathews and Tom Newman. HOME RUN stars Scott Elrod, Vivica A. Fox, Dorian Brown and Charles Henry Wyson.

In addition to the theatrical release of the film, Home Run the novel released in March 2013 with David C Cook publishers. Travis Thrasher, celebrated novelist, was enlisted to adapt the screenplay into a deeply moving story for fiction readers.

Samuel Goldwyn Films is a major, independently owned and operated motion picture company that develops, produces and distributes innovative feature films and documentaries. The company is dedicated to working with both world renowned and emerging writers/filmmakers and committed to filmed entertainment that offers original voices in uniquely told stories. Currently in release is RENOIR, Gilles Bourdos’ lush biopic on the famous Impressionist painter and Craig Juntunen’s STUCK, a moving film on the international adoption crisis. Following the release of HOME RUN, upcoming releases will be Academy Award® nominee James Cromwell starrer STILL MINE, and the highly anticipated wine documentary SOMM, a never before seen look into the prestigious and exclusive Court of Master Sommeliers.

David C Cook is a leading nonprofit resource provider serving the global Church with life-transforming, Christ-centered materials. Headquartered in Colorado Springs, Colorado, with offices in Illinois, Canada and the United Kingdom, David C Cook’s resources are published in over 150 languages and distributed in more than 160 countries. Originally founded in 1875 as a curriculum publisher, today David C Cook publishes numerous bestselling fiction and non-fiction books from a variety of award-winning authors. It is also a leading provider of worship music through its Integrity Music and Kingsway Music labels, which produce over one-third of the top 100 praise and worship songs sung around the world.