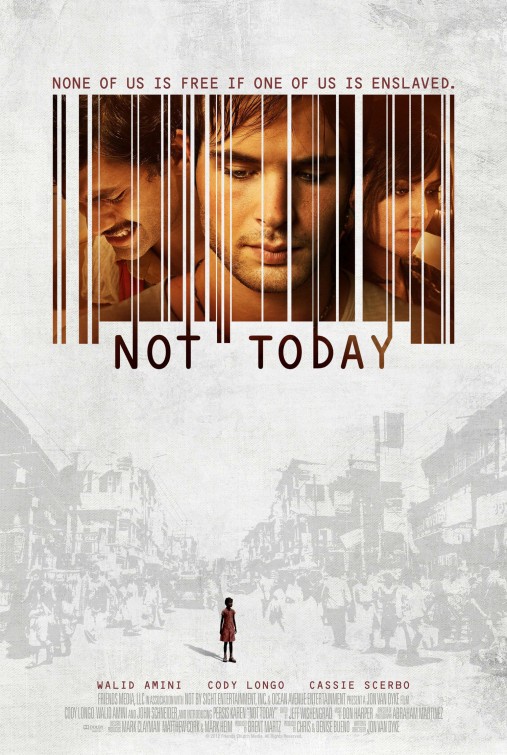 YORBA LINDA, Calif. – April 30, 2013 – Can a movie entertain audiences into activism? And will active communities put a movie in local theaters? Yes and yes, says NOT TODAY—a drama on the fight against human trafficking—now adding 37 new openings in markets across the country, beginning May 3.  Most of those new theaters represent “market pull”—communities pre-purchasing hundreds of tickets to open the film in local theaters—and the list is growing.

“People see NOT TODAY and they talk—and talk spreads,” Producer Brent Martz said. “This second wave of theatrical openings is a testament to word of mouth. We’re humbled and pleased.”

Even movie reviewers are moved by NOT TODAY, the first church-made film on an international issue. The Washington Post’s Sean O’Connell writes:  “If NOT TODAY makes even the slightest difference for a helpless child caught in this vicious cycle, then it earns the right to play on as many theater screens as possible.”

“I just watched the movie in Fort Worth, Texas, and must say, it was extremely well made and definitely got the message across,” a fan writes on NOT TODAY’s Facebook wall. “I’ve read stories and statistics on trafficking over the last year, but seeing the story lived out and the hope that something can be done puts a whole new perspective on things. I’ve signed petitions and raised awareness among friends, but I want to do so much more now. Thank you all for not being afraid to speak the truth even when people would rather turn a deaf ear and blind eye.”

Local fans bring NOT TODAY to their communities with a 400-ticket commitment. Information on how to schedule local screenings is at NotTodaytheMovie.com.

Produced by Friends Media, an arm of Friends Church of Yorba Linda, Calif., NOT TODAY features Cody Longo (Hollywood Heights, Fame, Make It or Break It), John Schneider (OCTOBER BABY, Smallville, The Dukes of Hazzard), Shari Rigby (OCTOBER BABY, The Bold and the Beautiful), Walid Amini (Veep, NCIS) and Cassie Scerbo (Make It or Break It, Hot in Cleveland).

SYNOPSIS:  In NOT TODAY, Caden Welles (Longo) lives as large as any 20-year-old could dream. Then expectations of a never-ending party in India crash hard—but not as hard as his conscience when he refuses to help a starving man and his little girl. Attempting to right his wrong, Caden’s eyes are forced open to a world few Americans know exists: the thriving human-trafficking trade. Spurred by a true purpose, an unlikely friendship and the prayers of his mother and girlfriend, Caden leads an unlikely search for the girl.

NOT TODAY is a powerful reminder that change is possible if we’re willing to open our eyes . . . today.

NOT TODAY opens in these new markets beginning May 3:

Using education to lift lives and prospects of India’s “untouchable” Dalit people, Friends Church has committed $20 million to build 200 of 1,000 proposed schools for Dalit children in the coming decade. Friends already has funded more than 40 of the current 107 schools. The church’s profits from NOT TODAY go toward building schools and freeing children.

To bring NOT TODAY to local theaters: NotTodaytheMovie.com/theaters