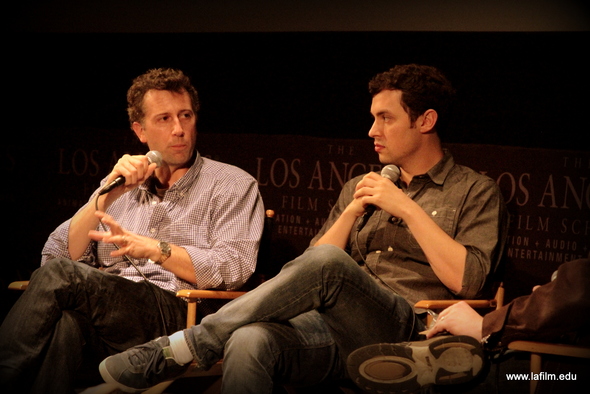 Hollywood, CA (Friday, March 15th, 2013) – The Incredible Burt Wonderstone, opening in theaters tonight nationwide, was screened pre-release on Tuesday during a panel hosted by The Los Angeles Film School in collaboration with The Q&A with Jeff Goldsmith. Guest speakers for the evening were writers Jonathan M. Goldstein and John Francis Daley.

Jonathan M. Goldstein is an established television and film writer/producer(The New Adventures of Old Christine, Bones, Horrible Bosses.) Actor and writer John Francis Daley began his career on the popular television show Freaks and Geeks and is a series regular on Bones. Goldstein and Daley collaborated previously on Horrible Bosses.

In attendance of the event were approximately 315 Los Angeles Film School students, industry professionals and aspiring writers. Goldstein and Daley spoke on how they began their individual careers, the experience of meeting on the set of The Geena Davis Show, collaboration and everything from inception to the production of The Incredible Burt Wonderstone. Regarding his entry into screenwriting Daley explained, “It’s something I always wanted to do as a kid. I just happen to start getting work as an actor first, you don’t see many nine year old screenwriters.”

Goldstein’s advice to the aspiring writers and filmmakers: “…you have to be collaborative. You have to fight the battles that you believe in, but you have to pick those battles very carefully because the minute you are branded with like “oh they’re difficult” there are million other guys they can work with. So you really gotta make people want to work with you again.”

A podcast of the Q&A in its entirety is available for free download today via iTunes.

About the Los Angeles Film School

The Los Angeles Film School (www.lafilm.edu) is a creative arts college that offers career-focused, accredited Bachelor and Associate of Science degrees. Students receive an immersive educational experience in world-class facilities with a supportive culture where seasoned instructors collaborate with talented, award-winning alumni to help students build professional networks that can last a lifetime.