AVAILABLE TODAY ACROSS DIGITAL STORES FOR UNDER $15 ON DIGITAL HD 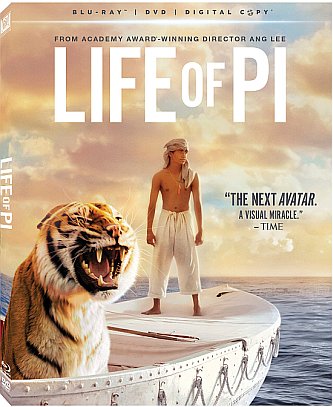 LOS ANGELES (February 19, 2012) ­ Twentieth Century Fox Home Entertainment today announced the availability of Oscar® Winning Director Ang Lee’s cinematic masterpiece LIFE OF PI on DIGITAL HD five days before the 85th Academy Awards. Nominated for 11 Oscars including Best Picture and Best Director, the inspirational epic journey can be enjoyed on connected HDTVs in your home, or on your tablet or smartphone on the go.

“Today, digital platforms offer us greater flexibility to innovate our consumer offerings,” said Mary Daily, President of Worldwide Marketing and Chief Marketing Officer, Twentieth Century Fox Home Entertainment. “Revisiting the magical world that Ang Lee has created with LIFE OF PI on Digital HD gives audiences the choice to enjoy this beautiful masterpiece on the device of their choice.”

Based on the acclaimed best-selling novel from Yann Martel that has been published in 40 languages, and brought to life by visionary Academy Award winning director Ang Lee, this magical adventure of hope, wonder, survival, and the power of the human spirit has been celebrated by critics all over the world. A ³magnificent and moving² (Peter Travers, Rolling Stone) motion picture event that has been hailed as ³a masterpiece² (Betsy Sharkey, Los Angeles Times), taking in over $500 million in worldwide box office.  LIFE OF PI follows Pi Patel, a young man on a fateful voyage who, after a spectacular disaster, is marooned on a lifeboat with the only other survivor, a fearsome 450 lb Bengal Tiger named Richard Parker. Hurtled into an epic journey of adventure and discovery Pi and his majestic companion make an amazing and unexpected connection.

Twentieth Century Fox Home Entertainment, LLC (TCFHE) is a recognized global industry leader and a subsidiary of Twentieth Century Fox Film, a News Corporation company. Representing over 75 years of innovative and award-winning filmmaking from Twentieth Century Fox, TCFHE is the worldwide marketing, sales and distribution company for all Fox film and television programming, acquisitions and original productions as well as all third party distribution partners on DVD, Blu-ray , Digital Copy, Digital HD , and VOD (video-on-demand). Each year TCFHE introduces hundreds of new and newly enhanced products, which it services to retail outlets from mass merchants and warehouse clubs to specialty stores and e-commerce throughout the world.