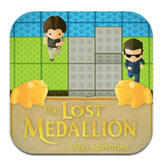 Los Angeles, Calif. (December 19, 2012) –  On December 10,  MeThinx Entertainment released a kid-friendly interactive smart phone application called The Lost Medallion: Billy’s Adventure, that coincides with the storyline found in the captivating new film, The Lost Medallion: The Adventures of Billy Stone. The game is made for children ages six through 12 and takes players through a labyrinth with Billy and friends.

Billy adventures through the jungle on ten levels to find the lost medallion using his trusty set of tools, including a metal detector, shovel and more. Billy’s Adventure is available to download as an app on iTunes ® and is compatible with the iPhone, iPod Touch, and the iPad. The game can also be found through the Android app store for android devices.

The journey of The Lost Medallion begins as Daniel Anderson (Kendrick) visits a foster home to drop off a donation and is quickly roped into telling the kids a story. Daniel tells the tale of Billy Stone (Unger) and Allie (Hanratty), two 13-year old friends who uncover a long-lost medallion and accidentally wish themselves back in time.

In order for Billy to save Allie’s life, he must give up the lost medallion to Cobra (Dacascos), who rules the island and its people. In order to retrieve the medallion and save the island people from slavery, Billie and Allie must work together with a young arrogant king (Jansen Panettiere- The Perfect Game), the king’s best friend (William Corkery), and a wise old man (Hong), who guides their way.

For more information on The Lost Medallion: Billy’s Adventure and the theatrical release, please visit www.thelostmedallion.com.