Mystery in the Mist Edition 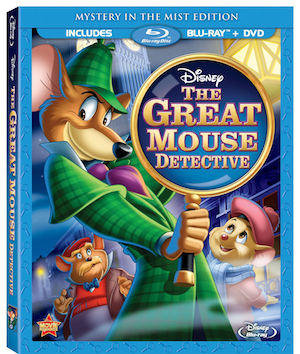 The Sherlock Holmes of Mousedom Embarks on a Heroic Journey when

“The Great Mouse Detective” Mystery in the Mist Edition

Arrives for the First Time on Blu-rayTM and HD Digital on September 18, 2012

On September 18, 2012, fans can experience Disney’s greatest little mystery, in High Definition picture and sound, and go on a great big adventure as “The Great Mouse Detective” Mystery in the Mist Edition arrives on 2-Disc Blu-ray Combo Pack and HD Digital. When the diabolical Professor Ratigan kidnaps London’s master toymaker, the brilliant Basil of Baker Street and his trusted sidekick Dawson try to elude the ultimate trap and foil the perfect crime. This family classic on Disney Blu-ray proves big heroes come in small packages.

HD Digital = Consumer should check with their preferred digital retailer for pricing and additional information.

“So You Think You Can Sleuth” – Viewers get an introduction to private investigating to kick off the “Great Mouse Detective” film.

“The World’s Greatest Criminal Mind” Sing-A-Long Song – young fans can sing along with Vincent Price to the song’s villainous vocals.

“The Making of the Great Mouse Detective” – In this bonus feature, fans get a behind the scenes look at this classic film.