Every Package Includes a Pink Ticket and One Will Transport a Winner
to Meet Katy! 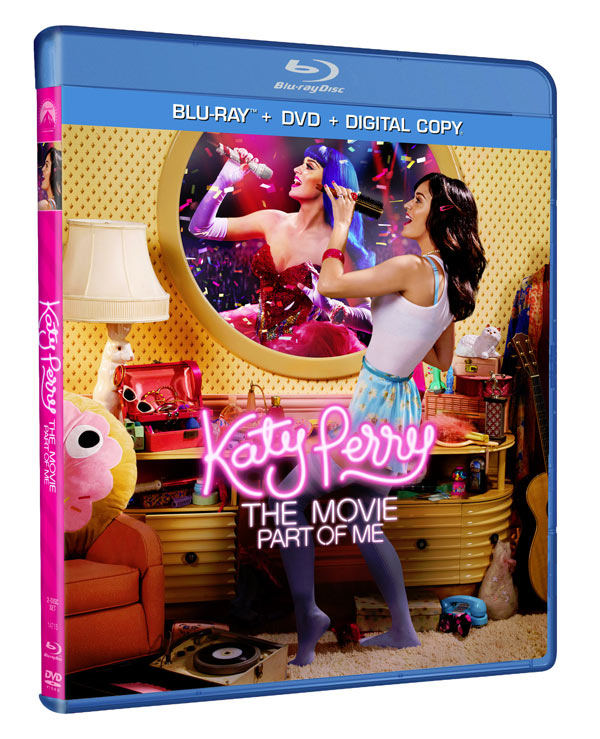 HOLLYWOOD, Calif. – (August 13, 2012)  The fun, glamorous, heartbreaking, inspiring, crazy, magical, passionate, and honest mad diary of one of the biggest performers on the planet blasts off when the KATY PERRY: Part of Me movie debuts on Blu-ray and DVD (both with UltraViolet™), On Demand and for Digital Download on September 18, 2012 from Paramount Home Media Distribution.  Giving fans unprecedented access to the real life of the music sensation, KATY PERRY: Part of Me exposes the hard work, dedication and phenomenal talent of a girl who remained true to herself and her vision in order to achieve her dreams.   Featuring rare behind-the-scenes interviews, personal moments between Katy and her friends, and all-access footage of rehearsals, choreography, Katy’s signature style and more, KATY PERRY: Part of Me reveals the singer’s unwavering belief that if you can be yourself, then you can be anything.

KATY PERRY: Part of Me will be available in a Blu-ray/DVD combo with a Digital Copy and UltraViolet, a three-disc Blu-ray 3D™/Blu-ray/DVD combo set with a Digital Copy and UltraViolet that includes the film in high definition and 3D for the ultimate immersive experience, and on DVD.  Both combo sets boast new, never-before-seen footage, more of Katy off-stage and on, behind-the-scenes of the California Dreams tour and much, much more.  In addition, every Blu-ray and DVD available for sale in the 48 contiguous United States will include a Pink Ticket that gives fans a chance to win awesome prizes, including a once-in-a-lifetime grand prize: meeting Katy herself! (See www.katyperrypinkticket.com for complete rules and details).  Offering tremendous value and hours of entertainment for fans of all ages, the DVD, Blu-ray/DVD Combo and three-disc set will be available as low as $15.99, $21.99 and $27.99 respectively.

All Blu-ray and DVD releases available for purchase will be enabled with UltraViolet, a new way to collect, access and enjoy movies.  With UltraViolet, consumers can add movies to their digital collection in the cloud, and then stream or download them – reliably and securely – to a variety of devices.

The KATY PERRY: Part of Me Blu-ray 3D/Blu-ray/DVD combo includes all of the above, in addition to a Blu-ray 3D disc with the feature film presented in 1080p high definition with English 5.1 DTS-HD Master Audio and English Audio Description and English, English SDH, French, Spanish and Portuguese subtitles.

KATY PERRY: Part of Me will also be available as a single-disc DVD.

KATY PERRY The Movie: Part of Me