“..one of the year’s most cheerful, most relaxed, most easily enjoyable comedies.”

A LEAGUE OF THEIR OWN 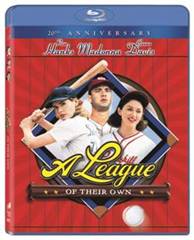 Culver City, CA (August 7, 2012) – Fans will cheer yet again when the girls of the Rockford Peaches take the field to celebrate the 20th anniversary of A LEAGUE OF THEIR OWN, debuting on Blu-ray™ from Sony Pictures Home Entertainment on October 16th – just one week before the 2012 World Series of Baseball. This classic is based on the true story of the pioneering women who blazed the trail, both on the field and off, for generations of athletes to follow. The delightful sports tale, which taught America “there’s no crying in baseball,” was directed by Penny Marshall (Awakenings, Big). The film stars Tom Hanks (Extremely Loud & Incredibly Close, The Da Vinci Code), as Jimmy Dugan, a has-been pro who leads teammates Mae, Dottie, Doris and Kit into the All-American Girls Professional Baseball League (AAGPBL) World Series. Academy Award© winner Geena Davis (Best Actress in a Supporting Role, The Accidental Tourist, 1987), Madonna (Die Another Day, Evita), Lori Petty (Poetic Justice, Free Willy) and Rosie O’Donnell (TV’s “Nip/Tuck,” “The Rosie O’Donnell Show”) are the key ball players. Jon Lovitz, David Strathairn, Garry Marshall and Bill Pullman also star in various roles. The inspiration for A LEAGUE OF THEIR OWN are the AAGPBL’s real women, who in 1943/World War II were caught in a world of new images and old values. The screenplay is by Academy Award® nominees Lowell Ganz and Babaloo Mandel (Splash, 1984), and the film is produced by Academy Award® nominee Robert Greenhut (Hannah and Her Sisters, 1986) and Elliot Abbott (Awakenings). Bonus features, as previously released on DVD, include director and cast commentary, 15 deleted scenes with optional video intro commentaries, Madonna’s “This Used to be My Playground” music video, and “Nine Memorable Innings,” an 11-part documentary.

SYNOPSIS: Tom Hanks, Geena Davis and Madonna star in this major league comedy from the team that brought you Big and City Slickers. Hanks stars as Jimmy Dugan, a washed-up ballplayer whose big league days are over. Hired to coach in the All-American Girls Baseball League of 1943 – while the male pros are at war – Dugan finds himself drawn back into the game by the hearts and heroics of his all-girl team. Teammates Madonna, Lori Petty and Rosie O’Donnell round out this all-star roster, with Jon Lovitz adding a scene-stealing cameo. Based on the true story of the pioneering women who blazed the trail for generations of athletes, A LEAGUE OF THEIR OWN is “a home run!”
(Joel Siegel, ABC-TV)

A LEAGUE OF THEIR OWN has a run time of approximately 128 minutes and is rated PG for language.

Academy Award® is the registered trademark of the Academy of Motion Picture Arts and Sciences.