GET READY TO SPARKLE!

ONE OF GIRLS’ FAVORITE CHARACTERS MAKES HER FEATURE FILM DEBUT IN A DAZZLING, ALL-NEW ADVENTURE 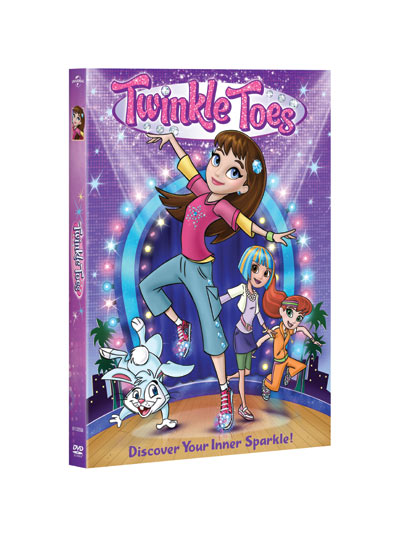 Universal City, California, May 22, 2012 –Inspired by the best-selling SKECHERS Kids footwear line, join Grace “Twinkle Toes” Hastings as she headlines her first-ever, full-length feature film, Twinkle Toes: The Movie, debuting exclusively on DVD on July 31, 2012 from Universal Studios Home Entertainment. Twinkle Toes: The Movie brings all the charm and excitement of the Twinkle Toes brand to the screen in a fun-filled, original film that will have girls dancing out of their seats.  The sweet and adorable Twinkle Toes character that girls have come to know and love overcomes her most secret fears and learns to celebrate her individuality with energy, pizzazz and super-cute shoes!

Filled with music, friendship, laughter and heart, parents and their daughters will want to watch Twinkle Toes: The Movie again and again.  This charming story of courage, self-expression and finding the “sparkle” within will inspire Twinkle Toes’ legions of fashionista friends to develop their own talent and achieve their dreams.

Twinkle Toes: The Movie is a sparkly, fun-filled adventure that will make audiences want to get up and dance! Grace “Twinkle Toes” Hastings has a big secret: she gets terrible stage fright in front of anyone except her fluffy friend Walter. As Grace works to overcome her fears, and makes some super-cool friends at her new school, she discovers that it’s OK to be herself and shine! 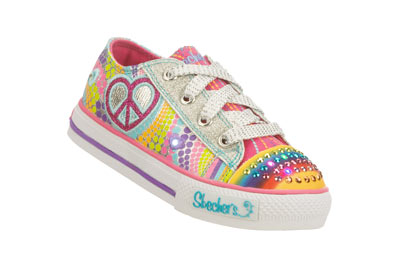 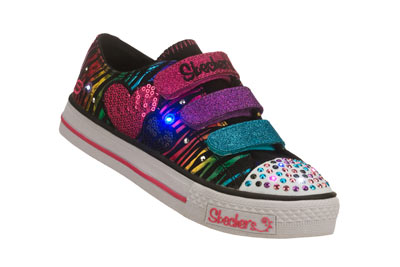 SKECHERS USA, Inc. (NYSE:SKX), based in Manhattan Beach, California, designs, develops and markets a diverse range of footwear for men, women and children under the SKECHERS name. SKECHERS footwear is available in the United States via department and specialty stores, Company-owned SKECHERS retail stores and its e-commerce website, and over 100 countries and territories through the Company’s global network of distributors and subsidiaries in Brazil, Canada, Chile, Japan, and across Europe, as well asthrough joint ventures in Asia. For more information, please visit www.skechers.com, and follow us on Facebook (www.facebook.com/SKECHERS) and Twitter (twitter.com/#!/SKECHERSUSA).

In honor of its Centennial anniversary, Universal Pictures proudly salutes 100years of unforgettable films that have entertained audiences and touched the hearts of millions around the globe. In celebration of its first 100 years,Universal Studios Home Entertainment is proud to present a selection of many beloved movies as part of an extensive year-long program that underscores the studio’s rich cinematic history and indelible cultural impact.

This announcement may contain forward-looking statements that are made pursuant to the safe harbor provisions of the Private Securities Litigation Reform Act of 1995. Forward-looking statements include, without limitation, any statementthat may predict, forecast, indicate or simply state future results, performance or achievements, and can be identified by the use of forward looking language such as “believe,” “anticipate,” “expect,” “estimate,” “intend,” “plan,” “project,” “will be,” “will continue,” “will result,” “could,” “may,” “might,” or any variations of such words with similar meanings. Any such statements are subject to risks and uncertainties that could cause actual results to differ materially from those projected in forward-looking statements. Factors that might cause or contribute to such differences include international, national and local general economic, political and market conditions including the ongoing global economic slowdown and market instability; entry into the highly competitive performance footwear market; sustaining, managing and forecasting costs and proper inventory levels; losing any significant customers, decreased demand by industry retailers and cancellation of order commitments due to the lack ofpopularity of particular designs and/or categories of products; maintainingbrand image and intense competition among sellers of footwear for consumers; anticipating, identifying, interpreting or forecasting changes in fashion trends, consumer demand for the products and the various market factors described above; sales levels during the spring, back-to-school and holidayselling seasons; and other factors referenced or incorporated by reference in SKECHERS’ annual report on Form 10-K for the year ended December 31, 2011 and its quarterly report on Form 10-Q for the three months ended March 31, 2012. The risks included here are not exhaustive. SKECHERS and Universal Studios Home Entertainment operate in a very competitive and rapidly changing environment. New risks emerge from time to time and the companies cannot predict all such risk factors, nor can the companies assess the impact of all such risk factors on their respective businesses or the extent to which any factor, or combination of factors, may cause actual results to differ materially from those contained in any forward-looking statements. Given these risks and uncertainties, you should not place undue reliance on forward-looking statements as a prediction of actual results. Moreover, reported results should not be considered an indication of future performance.