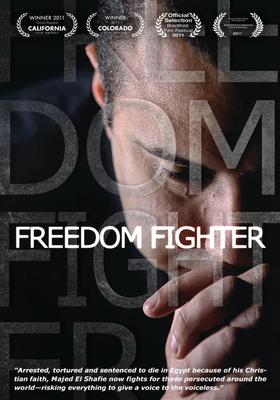 (SHIPPENSBURG, PA) — FREEDOM FIGHTER, the award-winning human rights documentary, debuts on DVD April 24th from Destiny Image Films. Directed by Chris Atkins, this powerful film documents the work of Majed El Shafie as he travels to Afghanistan and Pakistan seeking out those persecuted for their religious beliefs, and challenging their governments to change.

FREEDOM FIGHTER documents one such trip to Pakistan, where Majed meets 4-year-old Neha. Raped at the age of 2 in an attempt to force her family to convert from Christianity to Islam, Neha and her family must live in hiding as extremists hunt them. We follow Majed as he desperately works to get Neha and her family out of Pakistan. The film also explores persecution in Iraq, China and Egypt. Interviews with victims, activists and politicians help to tell Majed’s story as well as the larger story of persecution taking place around the world.

Born in Egypt, Majed was arrested, tortured and sentenced to die after converting from Islam to Christianity. Majed managed to escape to Israel, before eventually settling in Canada where he founded One Free World International, an international human rights organization that focuses on the rights of religious minorities around the world and promotes tolerance, understanding and respect for diverse religious beliefs. The organization promotes awareness of human rights abuses and comes to the aid of those who are suffering because of their religious beliefs or expression.

In November, Majed testified before the U.S. House of Representatives’ Subcommittee on Africa, Global Health, and Human Rights, and in March he testified before the Tom Lantos Human Rights Commission, co-chaired by Congressman Wolf and Congressman McGovern. Last week, Majed returned to DC to lead the very first Canadian delegation to visit the United States for the sole purpose of discussing freedom of religion and the rights of minorities around the world. With several Members of Canadian Parliament and Senate as observers, the delegation met with members of the U.S. Congress and Senate and other officials to discuss the American and Canadian missions to Afghanistan and Iraq, relations with Egypt and Pakistan in light of the so-called “Arab Spring” and the ensuing threats to the state of Israel.