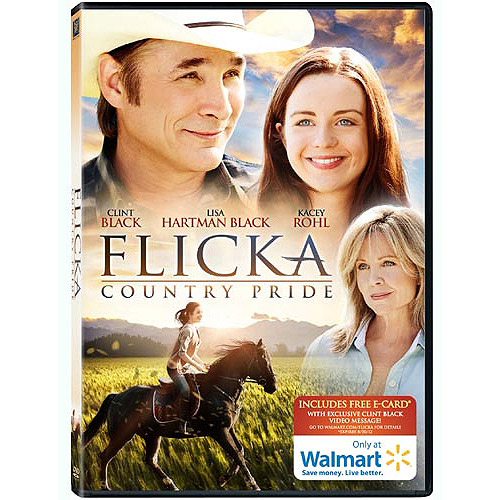 When Toby (Black) takes on a job at a stable with Flicka in tow, the owner’s teenage daughter Kelly (Rohl), quickly bonds with the wild horse. A budding equestrian rider, she hopes to break Flicka for an upcoming competition, despite her mother’s (Hartman Black) disapproval. With the competition approaching, a rival trainer stealing business, and a growing fear they may be forced to sell the stable, Toby steps in to turn things around for Kelly and her mother.

Grammy Award® Winner Clint Black is one of country music’s superstars with over 20 million albums sold worldwide. Having written over 100+ songs including 23 #1 songs Clint is an active philanthropist overseeing numerous charities.

Not only is the story filled with good family values, but according to Director Michael Damian, working behind the scenes was just as rewarding. Damian commented, “Directing Flicka: Country Pride was a wonderful experience for me! Clint Black and Lisa Hartman Black poured their hearts into the characters they played and brought genuine warmth and deep emotion to the film.  My wife Janeen and I are blessed to have an incredible professional relationship, which is a rare and precious thing. So for us, it was wonderful to see a celebrity couple like Clint and Lisa working together with such love and respect. Their high regard for Christian values and dedication to their family is an inspiration. They are a true Hollywood success story.”

The Flicka: Country Pride Blu-ray and DVD has two behind-the-scenes featurettes on the making of the film and a never-before-seen music video.  Available at 4,000 Walmart and Sam’s Club locations nationwide and in Canada, both the Blu-ray and DVD are now available for pre-order exclusively at Walmart.com.  Prebook is April 4.