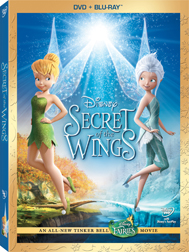 EXCITING WINTER ADVENTURE TAKES TINKER BELL ON AN EPIC JOURNEY
AND REVEALS A SECRET… THAT CHANGES HER LIFE FOREVER!

For Tinker Bell and the other warm season fairies, the Winter Woods remains a mysterious and forbidden place. “Secret of the Wings” takes audiences on an amazing journey of discovery with Tink, into this forbidden world where she discovers a magical secret that changes her life forever.

“Secret of the Wings” is Disney’s highly-anticipated all-new movie in the Tinker Bell Disney Fairies film franchise. These beautifully-animated films have ranked at the top of the home entertainment charts every year they have been released.
In addition to the all-new feature film, the spectacular animated release includes a host of exciting bonus features that extend the viewing experience, taking audiences deeper into the magical world of Disney Fairies. (More details forthcoming)

To celebrate the upcoming release of “Secret of the Wings,” Disney has launched a new destination in Facebook for parents to stay updated on Disney Fairies news as well as receive the best new content and activities that they can share with their children. Audiences can become a fan now at: https://www.facebook.com/DisneyFairies.

For the latest information on “Secret of the Wings,” fans are also encouraged to:
Log-on to www.Disney.com/SecretofTheWings to view film clips, etc…

FILM SYNOPSIS:
Journey with Tinker Bell and her fairy friends into the forbidden world of the mysterious Winter Woods, where curiosity and adventure lead Tink to an amazing discovery and reveal a magical secret that could change her world forever.

ABOUT DISNEY FAIRIES:
Disney Fairies is a franchise built around one of Disney’s most famous and beloved characters, Tinker Bell, her fairy friends (Fawn, Iridessa, Rosetta, Silvermist and Vidia), the power of pixie dust and the enchanted world of Pixie Hollow. Launched in 2005, the Disney Fairies franchise carries on Disney’s rich heritage of children’s storytelling across numerous lines of business including film, publishing, lifestyle merchandising (i.e., apparel, toys, electronics, home décor and stationery), games, internet, mobile-web and theme parks, extending the fairy experiences into many girls’ homes across the globe.
To date, over 1,400 Disney Fairies and Tinker Bell books have been published in 57 countries and 33 languages; over 1.6 million copies of Disney Fairies magazines have sold in 40 countries; and more than 20 territories across North America, Latin America, EMEA and Asia Pacific can now visit DisneyFairies.com to play games, download activities and take flight in the virtual world of Pixie Hollow (where there are 40.5 million Fairies created in Pixie Hollow). Fans can also meet and view the Disney Fairies at any of the Disney theme parks and Disney on Ice shows around the world.

Following the great success of Walt Disney Pictures’ video premiere release of Tinker Bell on Blu-ray™ and DVD in 2008, the company has since released two additional movies, Tinker Bell and the Lost Treasure and Tinker Bell and the Great Fairy Rescue, and “Pixie Hollow Games” a TV special which premiered on Disney Channel in 2011. Secret of the Wings is Walt Disney Pictures’ fourth feature length installment in the movie franchise.

About Walt Disney Studios:
For more than 85 years, The Walt Disney Studios has been the foundation on which The Walt Disney Company was built. Today, the Studio brings quality movies, music and stage plays to consumers throughout the world. Feature films are released under the following banners: Disney, including Walt Disney Animation Studios and Pixar Animation Studios; Disneynature; Marvel Studios; and Touchstone Pictures, the banner under which live-action films from DreamWorks Studios are distributed. The Disney Music Group encompasses the Walt Disney Records and Hollywood Records labels, as well as Disney Music Publishing. The Disney Theatrical Group produces and licenses live events, including Disney on Broadway, Disney On Ice and Disney Live!