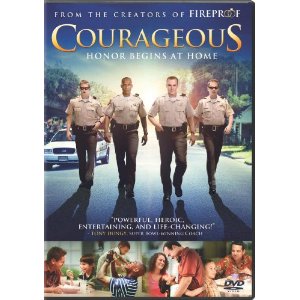 NASHVILLE – Jan. 31, 2012 – COURAGEOUS, the hit fatherhood film that packed theaters and touched lives across the country last fall, launched retail sales nationwide Jan. 17 and debuted as the top-selling DVD in the country, surpassing major Hollywood hits, including some Oscar® nominees, like THE DESCENDANTS and THE IDES OF MARCH.

A Sherwood Pictures production, the COURAGEOUS DVD is distributed by AFFIRM Films/Sony Pictures Home Entertainment in the general market and Provident Distribution in the Christian retail market. COURAGEOUS, the third theatrical and fourth film from Sherwood Pictures, tells the story of four men with one calling: to serve and protect. As law enforcement officers, they are confident and focused, standing up to the worst the streets have to offer. Yet at the end of the day, they face a challenge that none of them is truly prepared to tackle: fatherhood.

COURAGEOUS opened in theaters at No. 4, landing in the box office top 10 for four weeks, opening on just over 1,100 screens. Like its predecessors, FIREPROOF and FACING THE GIANTS, COURAGEOUS drew a faith and family audience, hungry for this type of content.

“With each film, we’ve been grateful to see audiences and theater counts grow,” said COURAGEOUS director, co-writer and featured actor Alex Kendrick. “It’s been remarkable to witness our church-made films do well head to head with Hollywood movies.  When we heard the COURAGEOUS DVD was No. 1 in the nation, our Sherwood family rejoiced about how many families may be touched and how many dads may find something in the film that helps them be better fathers. That’s our first measure of success.”

COURAGEOUS also is available on Blu-ray in a combo pack with the Exclusive Collector’s Edition DVD at CBA retailers with more than two hours of bonus features.

“Oscar®” is the registered trademark and service mark of the Academy of Motion Picture Arts and Sciences.

About COURAGEOUS and Sherwood Pictures
COURAGEOUS is the fourth film from Sherwood Pictures, a ministry of Sherwood Baptist Church and part of the congregation’s vision to “change the world from Albany, Ga.” Three of Sherwood’s first four films—COURAGEOUS, FIREPROOF and FACING THE GIANTS—opened in the box office top 10.  Brothers—and Sherwood pastors—Alex and Stephen Kendrick co-wrote COURAGEOUS, with Alex directing and acting and Stephen producing. Sherwood Baptist Senior Pastor Michael Catt and Executive Pastor Jim McBride and Terry Hemmings, president and CEO of Provident Music Group, are executive producers.