WITH THE FAMILY COMEDY HIT

FROM THE CREATORS OF DESPICABLE ME 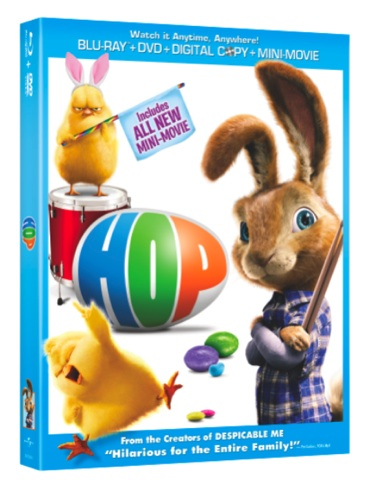 “The laughs don’t stop coming in this movie treat for all ages!” —Pete Hammond, BOXOFFICE

The perfect Easter gift, the HOP Blu-ray™/DVD Combo Packs deliver perfect hi-def picture and perfect hi-def sound and include an all-new, never-before-seen, music-filled mini-movie, extensive bonus features and interactive games, adding hours of entertaining fun for parents and children alike.  The Combo Packs also contain a Digital Copy of the film for a limited time, compatible with iTunes®, iPad®, iPhone®, iPod™ touch, Android or online retail partners. Also included is an UltraViolet™ copy, the revolutionary new way for consumers to collect movies and TV shows by storing them in the cloud to instantly stream and download to computers, tablets and smart phones.  Consumers can now truly enjoy their movies anytime, anywhere on the platform of their choice.

View the trailer at: http://www.youtube.com/watch?v=rGQmY4cPjBw

From the makers of Despicable Me comes an all-new comedy about candy, chicks and rock ‘n’ roll!

He was destined to be the Easter Bunny, but all he wanted to do was rock!  When teenager E.B. (voiced by Russell Brand) leaves for Hollywood in pursuit of his dream to become a rock star drummer, he meets Fred (James Marsden), an out-of-work slacker with his own lofty goals.  Together the two encounter a series of hilarious mishaps and misadventures and in the end help each other recognize the importance of family.   “The laughs don’t stop in this movie treat for all ages!” — Pete Hammond, BOXOFFICE